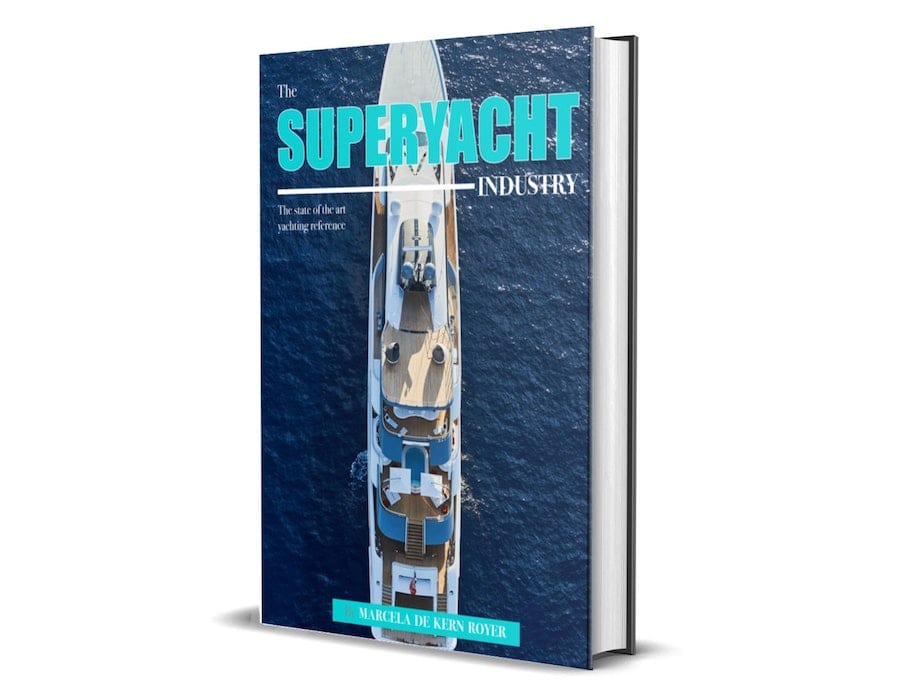 Marcela de Kern Roya, founder of Onboard and YPY Monaco, has released the first ever textbook written about the superyacht industry.

Titled ‘The Superyacht Industry’, the book was written in collaboration with over 95 superyacht experts, giving readers a competitive advantage in understanding this unique industry. It was released by Onboard Monaco on 1st December and has already been welcomed by leaders in the yachting world.

“This book is a celebration of knowledge offered by some of the most influential people in yachting,” said Jonathan Beckett, CEO of Burgess.

Author Marcela de Kern Royer collaborated with experts who design, build, buy, sell, equip, support, operate and manage the world’s largest yachts. They share their experiences and “gold nuggets of information”, focussing mainly on motor yachts of over 50 metres, describing how the industry works, from yacht design to yacht building, to yacht sales and operations.

The Superyacht Industry book is designed to be an asset and a reference for yacht owners and people employed in the yachting industry.

Marcela de Kern Royer is the founder and owner of Onboard, a consulting firm based in Monaco specialised in sales and luxury marketing in the yachting industry. She is also the founder and first president of Young Professionals in Yachting (YPY) Monaco chapter, founder of charity association AMLA (Association Monegasque pour l’Amerique Latine), and a member of the Yacht Club of Monaco.

A Monaco delegation from the Monaco Economic Board (MEB) visited the southern Russian hub of Rostov-sur-le-Don where building relations between the businesses of the region was top on the agenda.

Attended by 16 representative from 12 Monegasque organisations, a series of meetings took place in the southern Russian town from 17th to 20th September with a view to expand trade in the region.

The area is of particular interest as it is a crossroad with the Caucasus and has access to an Azov Sea port.

The Rostov-sur-le Don Chamber of Commerce and Industry’s Deputy-Director Victor Goncharov welcomed the delegation by hosting a business forum on the day of their arrival where a Memorandum of Understanding was signed by the two Chambers of Commerce.

Over the next days, several important meetings and gatherings took place including more than 70 face-to-face meetings between various business leaders from both sides, as a way to start the bridge building process and to better comprehend what each party can bring to the table.

Other highlights included a visit to the French Flag Register shipyard where the representatives had a glimpse at the industrial expertise Rostov has to offer. They were also treated to a trip to Rostov’s Museum of Fine Art, where they saw the exhibition Monaco, Histoires d’Artistes.

The trip was rounded out with a dinner hosted by Monaco’s Ambassador to Russia, Mireille Pettiti, where the delegates were able to discuss first impressions, which were highly favourable.

The MEB will return to Russia in November with the Ballet de Monte-Carlo as part of a trade mission scheduled for 2020.

Business & Finance Staff Writer - July 17, 2016
BUSINESS/BANKING: Boutique firm CMB Wealth Management has put on hold its expansion plans because of the UK’s decision to leave the European Union. CMB Wealth was launched last year as the UK arm of Monaco-based private bank, CMB, which is a subsidiary of Italy’s Mediobanca. Former Coutts investment director Julian Soper was hired as UK managing director to oversee the business’s growth. With a core client base in France, Italy and Germany, Mediobanca had partly chosen the UK so it could use its presence in London as a base to passport services into Europe, according to citywide.co.uk. Additionally CMB Wealth, which uses the investment expertise and teams in Mediobanca, had been planning to build a fund selection team in the UK, but this has now been put on the back burner. “Inevitably some decisions will be delayed by uncertainty,” said Soper. “There was always the idea we could use our place in London to passport into France and Germany. We will probably lose that passportng right. However, it was not integral to the strategy. “Plans to develop a fund selection team are being delayed by all of this. Is London in the long-term the right place to build this?” However, Soper stressed that CMB Wealth’s core business strategy remains intact and that the firm will continue to operate in the UK. Since its launch, the firm has been on an expansion drive which saw two transfers from the bank’s Monaco office, and three hires from Credit Suisse, SG Hambros and asset manager Lepercq, de Neuflize & Co. “It does not change things dramatically,” said Soper who does not believe that it will take two years to determine the UK’s new relationship with the EU. “Our base is in Monaco, which is a microstate, which is not in the EU, so there is a lack of disruption there. Our plan was always to target resident non-doms. Will there be fewer resident non-doms? Possibly but we are not too concerned.”