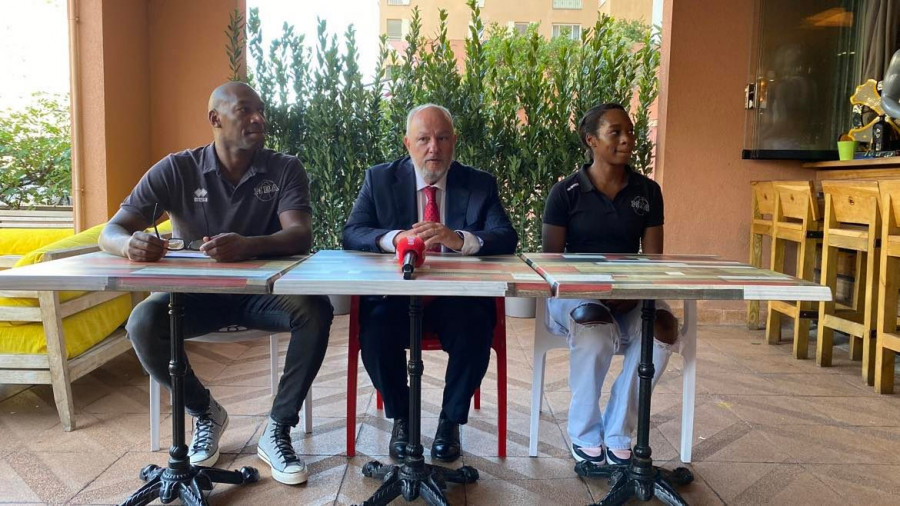 Monaco Basket Association, the Principality’s women’s basketball team, presented their new-look side on Monday and outlined their objectives for this season following a promotion to the LF2.

Just like the men’s basketball side, the Roca Team, the MBA has undergone a monumental transformation this summer. Only three players (Lucie Laroche, Ashunae Durant and Julia Chandler) have been retained, which therefore means that there has been a drastic overhaul of the playing squad. As per LF2 regulations, the club has had to adopt a more youthful roster, with four players under the age of 23 drafted in (Hermance Marti, Kimsy Demontoux, Fatou-Mata Touré and Ève Wembanyama).

The club have also brought in a new coach, Régis Racine, and a new assistant, Mohamed Lamine Keita. Racine, a former professional player, made the switch from coaching men’s sides to take up a role at LF2 side Limoges before arriving in the Principality. Questioned by Monaco Life as to what tempted him to take the reigns at the MBA, he responded, “The challenge first and foremost. Then there is the level that we’re playing at. I think a lot of people would be attracted by that.”

The players, the coaching staff as well as the club’s two kits for the upcoming season were all presented to the media during a conference in Fontvieille. It was also the time for the club to outline its objectives for the upcoming season. Having only just become a fully professional side following promotion last season, the MBA aren’t getting ahead of themselves. “The LF2 is a world apart from last year’s NF1,” said the club’s president Éric Elena.

Elena as well as head coach Racine were clear: “For our first year at this level, we’re playing to stay up,” said Elena. “I’m really hoping that we enjoy ourselves, that our supporters are happy to come watch us at the Gymnase Annonciade (home court), and that we produce some brilliant basketball. I hope that we will become a fully-fledged LF2 side in the future,” he added.

The MBA are eager to get underway following a lengthy two-month pre-season. “The preparation was long. We now want that adrenaline that you get from a game,” said Racine.

The club begin with consecutive home matches, both against Charnay, firstly in the Coupe de France (8th October) and then in the league (15th October). “They are the favourites for the championship,” Racine told Monaco Life. “That match will allow us to situate ourselves within the league,” he continued.

Basketball is flourishing within the borders of the Principality. The exploits from the Roca Team last season raised the profile and interest in the sport, whilst the MBA’s promotion further underlined the sport’s positive trajectory. “We are representing our Principality in a great light. We have to be proud of our club and be proud to represent our colours. I think we’re on a good path,” said Racine.

A difficult season lies in wait for the MBA, but it is a season that holds equally a lot of promise and a lot of excitement, as the club reaches new, unexplored heights.