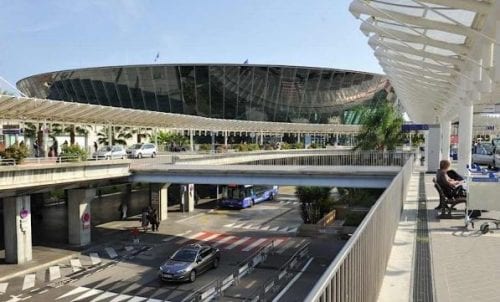 Nice Côte d’Azur Airport will be the first in France to offer free, fully electric busses for use between its terminals. The move marks another major step in the airport’s commitment to being carbon neutral and, by 2030, completely carbon free.

It was announced this week that Transdev Alpes-Maritimes has been selected by Nice Côte d’Azur Airport to deploy a fleet of three 100% electric buses, eCitaro Mercedes, which will operate seven days a week, from 4.30am to 12.30am, as shuttles between terminals and car parks of the second largest airport in France.

With a range of 160 kilometres, or eight hours, the fleet will allow the simultaneous and continuous operation of two shuttles, which will be utilising a continuous recharging process by recovery of kinetic energy.

In choosing 100% electric transport, the airport will be able to cut its CO2 emissions by 250 tonnes while also significantly reducing noise.

“Following the commissioning of the tramway extension to our terminals in December 2018, we are proud to become the first airport in France to offer free 100% electric shuttles to our passengers,” said Dominique Thillaud, President of the Board of Directors of the Aéroports de la Côte d’Azur. “This innovation reinforces our policy of preserving our territory and developing its attractiveness.”

The electric shuttles form part of the airport’s voluntary policy of preservation of the environment. In 2016, the airport achieved Level 3+ certification of the Airport Carbon Accreditation program, the highest rating, for its carbon neutrality. The Aéroports de la Côte d’Azur’s more ambitious goal is to achieve zero CO2 emissions by 2030.

The 12-metre shuttles will accommodate around 90 people and will have 26 seats with leather headrest, low bay windows and blue interior lighting “for a soothing atmosphere reminiscent of the Mediterranean”. Passengers will also have four USB ports in the vehicles. Meanwhile, a perfume diffuser will be triggered each time the doors are opened.

The acquisition of the fleet was supported by the Provence Alpes-Côte d’Azur Region and the Nice Côte d’Azur Metropolis.

“We wanted to make the southern region a driving force for climate agreements,” said Renaud Muselier, President of the Provence-Alpes-Côte d’Azur Region. “For this purpose, we voted in our Regional Climate Plan, a ‘COP in advance’, which concretely translates to 100 actions around five major axes, to which we devote nearly 25% of the budget of the region. Among these actions, mobility plays a major role. This project marks a step closer to our goal of becoming the first Smart region in Europe.”

Meanwhile, a fleet of electric buses are set to operate along the Promenade des Anglais from the beginning of December.

“Clean and ecological, these new means of transport will contribute to achieving the ambitious goal we have set for ourselves in the framework of our Climate-Territorial Energy Plan adopted in October, namely to reduce our greenhouse gas emissions by 22%,” added Mayor of Nice Christian Estrosi, President of the Nice Côte d’Azur Metropolis and Deputy President of the Provence-Alpes-Côte d’Azur Region.

The airport buses will be commissioned on 28th November.