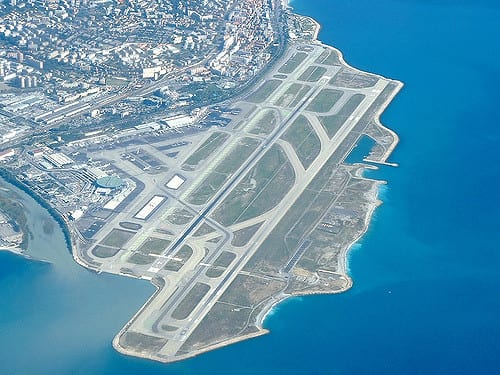 Nice Côte d’Azur Airport has announced the temporary closure of Terminal 1 in response to a downturn in activity due to the Covid-19 epidemic, switching all of its operations to Terminal 2.
The closure comes into effect Monday 16th March at midnight. “This reorganisation should optimise passenger flows, secure their routes and optimally monitor public health obligations,” said the airport in a statement.
Meanwhile, European countries are enforcing a strict ban on entry into the 26-state Schengen passport-free zone. The ban will cover all non-essential visits from third countries except for citizens of Schengen area countries, legal residents and their families.
The news from France’s second largest airport coincides with similar moves at airports throughout the country, including the closure of one terminal at Orly Airport from Wednesday and two at Charles de Gaulle by the end of next week.

Long-distance train traffic will be halved and the regional TER service will run two trains in three.
In French cities and towns, around 50% of trams and buses will continue running.

Monaco’s bus service CAM is no longer allowing tickets to be purchased from the driver on board buses, requesting that passengers purchase tickets from automatic distribution points before boarding.
“Ascent / descent will only be available by the doors located in the middle and at the rear of the bus. Ascent / descent through the front door will not be possible,” according the CAM website.