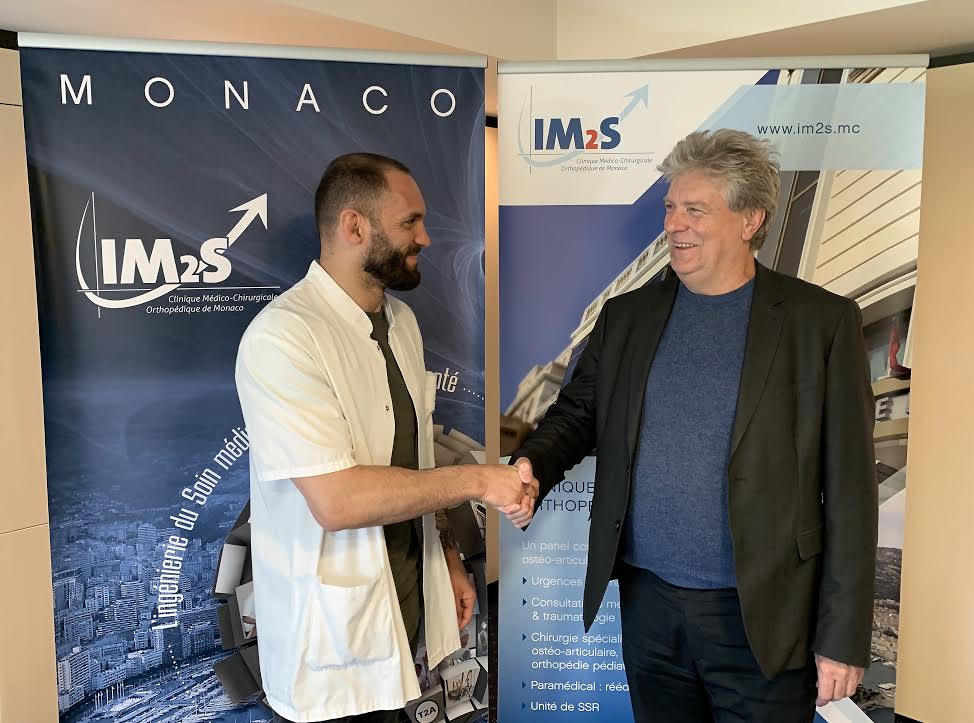 Signed by Dr Julien Brizi, specialist in Sports Medicine and Traumatology at the Institut Monegasque de Médecine du Sport (IM2S) and President of NCAA Jean Daumas, this exclusive partnership aims to grant the association’s top athletes rapid access to appointments for consultations and examinations, as well as to medical and trauma follow up treatments.

Nice Côte d’Azur Athletics represents a large number of top-ranking athletes who have careers both in France and abroad. The arrangement will solidify cooperative efforts between the two entities, thus strengthening the relationship.

brings together over 40 specialists in all osteo-articular pathologies.

Photo: acm.mc[/caption] Monaco’s Automobile Club launched a brand new event this week, the e-Rallye Monte-Carlo. Running from Wednesday, October 12, and ending on Sunday, October 16, the e-Rallye replaces “Rallye Monte-Carlo des Energies Nouvelles” and “Rallye Monte-Carlo ZENN” (Zero Emission – No Noise), the club said. Open to various categories of non-polluting and CO2-free vehicles, most powered by electricity or hydrogen (Fuel Cell), the e-Rally involves 35 crews who started their journey on October 12 at 2 pm from the postcard setting of a 12th-century castle in Fontainebleau, southeast of Paris. Over the past three days they've been driving the 1,000 km journey across the French countryside to make their way to Monaco, with the first crews expected to arrive in the Principality today, from noon onwards. The Gala Lunch and Prize Giving Ceremony will take place Sunday at the headquarters of the Automobile Club de Monaco. This first edition of e-Rallye Monte-Carlo is further proof that the Automobile Club de Monaco (ACM) is faithful to its long-term commitment of promoting renewable energy and sustainable development. Christian Tornatore, the ACM General Commissioner, said: “In this area, ACM definitely opened the way by organising an Electric Rally around Monaco in 1995. With this new e-Rallye Monte-Carlo, which is the road racing equivalent to the e-Prix for single-seaters, the idea is to start from much further away, just as the authentic pioneers of Rally Monte-Carlo did in 1911. For this modern times version of a clean rally, with zero CO2 emission, we are all very pleased, at ACM, that the entry list is full, with new generation vehicles representing more than ten car manufacturers.” In addition to electric vehicles entered by market leaders, such as Renault Zoé, VW e-Golf, Tesla Roadster and Tesla S, Nissan Leaf, BMW i3 and Citroën Berlingo, the “real stars of the show” will be the hydrogen (Fuel Cell) cars. “They are the ultimate clean cars and we are lucky that, for a world premiere, three Toyota Mirai and three Renault Kangoo, transformed by Symbio Fcell, will take part in this inaugural edition of e-Rallye Monte-Carlo," Mr Tornatore added. Read e-Rallye Monte-Carlo full agenda. Article first published October 12, 2016.

Local News Staff Writer - October 23, 2016
Migrants and anarchists clashed with police over the weekend ahead of the closure of the so-called Jungle refugee camp outside Calais planned for Monday. The estimated 7,000 residents will be offered places in other refugee centres dispersed thoughout France and 60 buses will be used to transport them. Authorities estimate that about 200 migrants have succeeded in reaching England by stowing away on vehicles heading for the Port of Calais and Eurotunnel. There have been dozens of fatalities, many involving young people. On Saturday, the British authorities took a group of adolescent girls to the UK, saying that the dismantling of the camp would otherwise leave them prone to sexual abuse. Heavy machinery will move in on Tuesday to flatten the tents and shelters left behind and a significant force of police and para-military personnel will be on hand to quell any violent protests. Meanwhile, the UK continues to fund a three-metre high wall 1 kilometre-long along the road that leads to the Calais ferry port. This replaces a double fence deemed not to be secure enough to stop migrants blocking the access road from the A16 motorway.