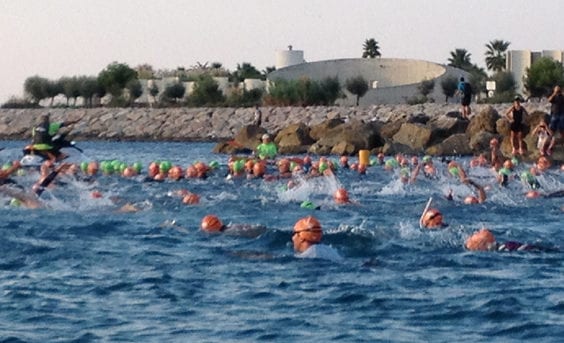 Open water swimming, or “wild swimming” as the Brits like to call it, which involves swapping the noisy, overheated, chlorine smelling local swimming baths for the pleasures of the naturally wet outdoors, has officially become de rigueur in Nice. Unlike the SwimRun movement that started in Sweden in 2005 whereby teams of two run and swim across islands in the Stockholm archipelago, in icy water temps of 8°-12°C, or the after-work clubs in London braving the river Thames throughout winter, open water swimming in the Mediterranean has more instant appeal. However, the day before Nice’s first open water swimming competition, the Prom’Swim, on Sunday was not looking promising.

First, the start of the course at Carras beach, at the west end of the Promenade, had been closed to the public on Saturday afternoon. Police patrolled the stretch of beach preventing bathers seeking relief from the Indian summer, as there were sanitation issues. (The “No Swimming” signs were still in place Sunday morning).

Then there was a sudden infestation of jellyfish. After a magnificent summer for swimming along the Coast, with very few méduses sited, a welcome change for beachgoers, Saturday was a different story as lifeguards took to their kayaks warning people to get out of the water.

But, undeterred, some 400 swimmers met at Carras Sunday morning for an 8 am start, facing a slightly wavy but warm 24°C sea and a 5km course. Other distances of 1km, 2km and a 500m kids race took off from the PromSwim village along the promenade des anglais.

There was a minute of silence to honour the victims of the Nice July 14 attack.

As Valerie Vic, a fortysomething French Nice resident who swims with a club at the Olympic-sized pool Jean Bouin, told Monaco Life, “I have lived in Nice a long time but never swam in the sea. This was a real challenge because it’s so different than swimming in a pool where you see the bottom.”

Prom’Swim was founded by Nice born Loic Branda, a former French swim champion?? He crossed English Channel with a partner in 2004 and has won 8 national titles. In 2009, he turned his attention to helping preserve natural environments and worked as an engineer specialising in water treatments before launching Swim The Riviera, which offers open water swim vacations.

A knockout and two fights stopped at...

Photo: Twitter Jamie Mcdonnell[/caption] The Salle Médecin of the Casino was the venue on Saturday night for the latest in the Monte-Carlo Boxing Bonanza series. In the WBA secondary Bantamweight bout between Jamie McDonnell and Liborio Solis, McDonnell retained his belt on a “no decision” ruling when the fight had to be stopped early, in the third round, after he was unable to continue due to a badly cut eye. WBA unbeaten Light-Heavyweight Champion Dimtry Bivol (12-0) kept his belt when he knocked out his challenger, WBA Number 11 Trent Broadhurst (20-2), in the first round. Meanwhile, in a WBA Featherweight eliminator, the former WBA Junior-Featherweight champion Scott Quigg, 34-1-2, won on a sixth-round technical knockout against Oleg Yefimovych, 29-3-1. The fight was stopped by the referee in the sixth round. Matchroom Boxing’s next and first US event is on November 11 at the Nassau Coliseum in New York, when Daniel Jacobs meets Luis Arias in a 12x3 Middleweight contest.

Sports Staff Writer - January 15, 2019
AS Monaco won a thrilling encounter against Partizan Belgrade after losing a 21-point lead during the EuroCup match.