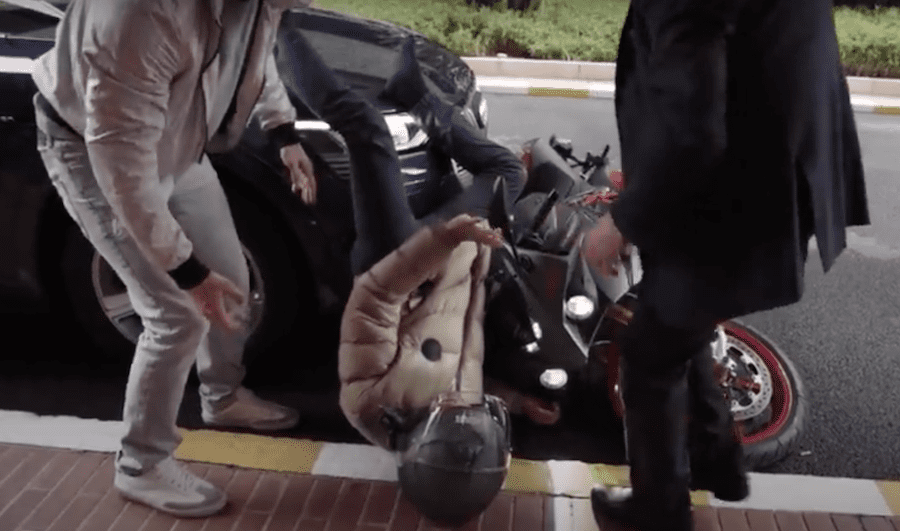 Former F1 champ and long-time Monaco resident Nico Rosberg took a rather embarrassing fall from his parked electric Energica motorbike whilst filming for his YouTube channel, but the good-natured driver took it all in his stride, turning it from awkward to adorable in two seconds flat.

On the eve of the Monaco Formula E race last weekend, 2016 Formula 1 champion Nico Rosberg took his 964,000 YouTube subscribers on a tour of the F1 track in the Principality on his one-off personalised Energica sport bike.

Rosberg’s trip around Monaco was going quite well. He cheekily asked a policeman if he could take his motorbike on part of the track usually forbidden to them. The officer initially denied him, but after explaining who he is, the policeman allowed him to pass, to which Rosberg said, “Sometimes it does help to be a Formula 1 driver.”

This is when things go wonky. The ex-pilot stops by a friend’s house to pick up his Formula E tickets, and as he starts to leave, he ungracefully, and in rather slow motion, takes a tumble from the bike onto the pavement just in front of a parked car. He found himself pinned between the bike and car, needing assistance to extract himself and losing a shoe in the process.

The caption on the video preceding the fall states what then becomes obvious, “Driving slow is not my best skill”. Happily, he was not hurt and instantly turned the moment into a funny one, showing what a good sport he is, even in his rare not-so-brilliant moments.

Rosberg is a shareholder in Formula E and a big advocate of electric vehicles. The 35-year-old grew up in Monaco and is the son of another racing great, 1982’s F1 Champion Keke Rosberg.