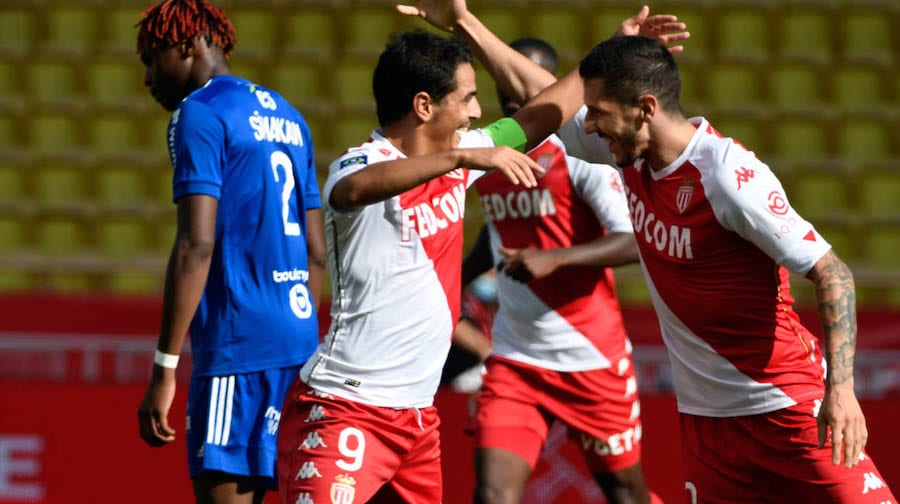 AS Monaco showed they have the right stuff when, despite some difficult moments, they held off Strasbourg for a 3-2 win at home on Sunday.
Winning their third match of the season, AS Monaco came out on top over Strasbourg in a game that saw them two men down for the last 25 minutes.
Despite the disadvantage, the team rose to the challenge and played a spectacular match against worthy opponents.
The first goal came in the ninth minute, as Kevin Volland set Wissam Ben Yedder up for a perfectly timed shot into the corner of the net, edging past Strasbourg Goalkeeper Bingourou Kamara. The goalie didn’t make that mistake again when in the 14th, he blocked a beautiful kick by Aurelien Tchouameni, and another in the 21stwith a one-two from Ben Yedder and Fodé Ballo-Toure.
Before the end of the first half, the Red and Whites struck again, at 45’ +2’. Ruben Aguliar aimed at the far end of the post and made it past Karama with a fantastic header.
After the break, Strasbourg came out determined. So determined, in fact, that within a minute, they lessened the score gap to 2-1 with a goal by substitute Medhi Chahiri. Ben Yedder leapt back into action and in the 53rd minute took control of the ball and put it between the posts on another Volland assist.
Not long after, Tchouameni was handed a red card, thus ejecting him from the rest of the game. One man down, the team carried on and held the score at 3-1. But in the 67th minute, Axel Disasi was given walking papers after a foul on Ludovic Ajorque.
Now two men down, the Strasbourg team launched an attack that resulted in another goal by Ajorque, cutting the Monaco lead to one point.
Undeterred, the red and Whites played strongly and kept the Alsatians at bay. They played out the remainder of the match two men down, and without another goal scored by either team.
Coach Kovac was overjoyed by the result and said after the game: “We finished brilliantly and those who came on did their part by showing character and giving all they had. It’s a unifying victory, that’s what I told the players.”
Team captain and top scorer of the game Wissam Ben Yedder was also proud of the team, adding: “At the end of the game I saw the determination and the desire not to want to concede a goal. We have a young team, but we have a lot of character and personality. They have shown these values and what they did in the last 20 minutes to not concede a goal is very good and bodes well for the future.”
AS Monaco faces Brest next Sunday at Stade Francis-Le Ble.