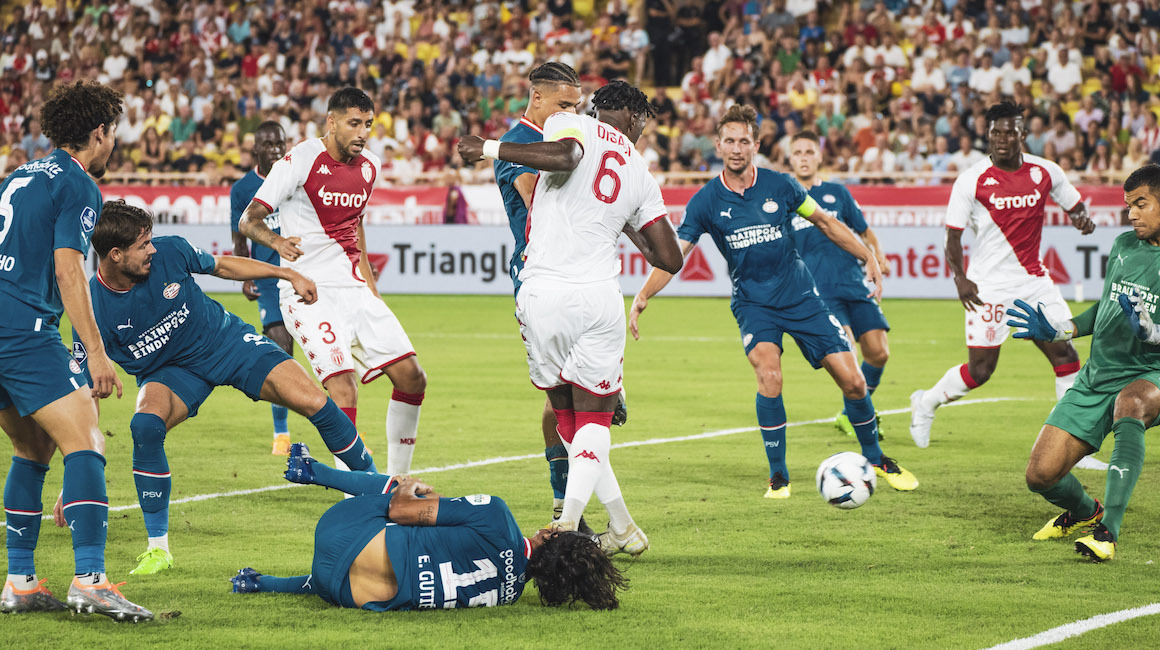 AS Monaco drew 1-1 against PSV Eindhoven at the Stade Louis II on Tuesday as the Principality club kept their Champions League hopes alive with a late Axel Disasi equaliser.

Monaco will therefore head to the Netherlands next week with everything to play for. On the balance of play, Philippe Clement will be disappointed to not be going into the second-leg with a lead, as he alluded to in his post-match press conference: “If a team were to win tonight, it was us,” said the Belgian coach.

It could have been worse, however. PSV had initially taken the lead in the first-half thanks to a thunderous Joey Veerman strike from the edge of the box, after Monaco’s new-look midfield pivot of Youssouf Fofana and Eliot Matazo were dragged out of position.

Prior to that, Monaco were left bemoaning a refereeing decision, or lack of one, which could have significantly altered the course of the match. A fierce Fofana strike hit Ibrahim Sangaré’s arm, warranting a VAR check, but nothing further. “For me, as the Monaco manager, it’s a penalty,’ said Clement. ‘The arm isn’t by the side of the body. We’ll see how UEFA standardise that,” he continued.

In the second-half, Monaco continued to look the more threatening of the two sides, but lacked the cutting edge to create clear-cut chances. That changed after a highly influential double substitution going into the final 15 minutes of the match. Sofiane Diop and new signing Breel Embolo both made their presence felt off the bench and turned the tide of the fixture.

Nimble, progressive and direct running from the pair drew free-kicks across the pitch, one of which was crucially converted. Ismail Jakobs, in the starting line-up in place of Caio Henrique, whipped the ball in for Axel Disasi to scramble home. The centre-back doesn’t score many, but on Monday, Clement had revealed how he expects him to score more in matches. “In training he scores goals,” said Clement pre-match.

Having scored a crucial equaliser, Monaco pushed for the winner, and they almost got it. Disasi was once again the danger man in the box. His shot was blocked and on the follow up, Fofana struck the post. A late barrage ensued;  Monaco’s fitness advantage was clear for all to see.

However, neither side could find the winner and both sides will head to Eindhoven next week with everything to play for, but also everything to lose.

To prevail, Monaco will need to once again show the “exemplary mentality” that they displayed in the first-leg in order to get the win.

Should they get the victory at the Philips Stadium, just as they did in the Europa League group stages last season (2-1), they will face either Rangers or Union Saint-Gilloise in the final qualification round.