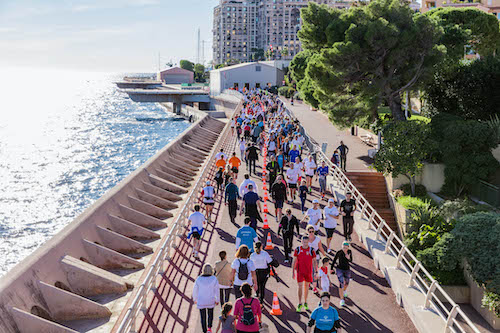 Who would have imagined in November 1999 that the first No Finish Line, created by the Junior Economic Chamber of Monaco to celebrate and promote the 1st Monegasque Day of the Rights of the Child, would still be around 20 years later?

The first edition attracted 750 participants who travelled 9,000 kilometres. Fast forward to the 19th edition held last year, and more than 15,600 people had completed over 432,670 kilometres. For this, the 20th anniversary edition, new records are expected to be broken.

Since the launch of this extraordinary adventure, 126,045 runners and walkers have helped raise €3,666,941 for projects benefiting poor and sick children.

The concept of No Finish Line is for participants to run or walk on a marked circuit of 1,370 metres in the district of Fontvieille, 24/24 from 16th to 24th November. Registration is required (€12 for adults and €6 for under 10 years of age).

To celebrate its 20th anniversary, a new challenge has been set: to attract 16,000 participants and cover 450,000 kilometres.

New this year will be the 20-year challenge. On 20th November at 8pm (20h), the challenge will begin, and the top 20 participants of the team who has travelled the most kilometres over the space of 20 straight hours will be crowned the winners.

The regular 24-hour non-stop challenge will once again form part of this year’s NFL event. It is listed as one of the out-of-stage races of the French Athletics Federation and will take place from Saturday 23rd November to Sunday 24thNovember. Participation is limited to 100 places.

No Finish Line also offers 50 ultra-runners the chance to run for nine days and eight nights from 14th to 16thNovember. In 2018, the male winner had travelled 900 kilometres and the female winner 843 kilometres. But the record has not been broken since 2012, when 1,041 kilometres was achieved in the men’s section, and 924 kilometres was travelled by a female.

For 20 years, Prince Albert II has been a strong supporter of No Finish Line, taking part each year in running a few laps of the circuit.

For every kilometre travelled by young people under the age of 20, an anonymous donor will donate €1 to Children & Future.

Meanwhile, the NFL welcomes the Casino Group as its new sponsor, which will provide all the necessary supplies to participants during the eight-day event. On average, that equates to 1.4 tonnes of oranges and bananas, 4,000 packets of biscuits and 12,000 cereal bars.

Entertainment for the 20th celebratory edition will include the Prince’s Carabinier Orchestra and surprise guests, a birthday party with party favours and giant birthday cake under the Bip Top in Fontvielle, a karaoke evening, speed-dating, and a special appearance by the new Roca basketball team.