No new Covid-19 cases since Sunday

Monaco’s health authorities have reported no new cases of the coronavirus since a single case on Sunday, keeping the total number of people who have tested positive for the virus at a steady 93.

Monday, Tuesday and Wednesday were banner days for the Principality in the fight against the Covid-19 virus. No new cases were reported over the course of three days and only a single case was detected on Sunday.

Six people who had been diagnosed with the disease have now been declared fully recovered, including high-profile cases such as HSH Prince Albert II and Minister of State Serge Telle.

Nine patients are currently in hospital, two of whom are in intensive care. These patients are the ones who have displayed only the most severe symptoms. Health authorities have been monitoring the less severe cases remotely as the patients convalesce at home through the Health Monitoring Centre that was set up specifically for this purpose. To date, there are 116 such patients using the service.

Health authorities are attempting to keep as many people at home as possible in order to keep the hospital from being overwhelmed by minor cases, allowing them to provide care not only for those suffering with coronavirus, but also those in need of other types of urgent medical assistance.

Local News Staff Writer - April 3, 2017
The French prosecutor handling the case involving a cache of weapons found in an apartment in Cap d'Ail last week has expressed dismay at the release of the main suspect on bail, despite the fact that the investigating judge had indicted him. The individual, 29, who possessed a military arsenal in an apartment close to Monaco, having been indicted by an investigating judge, was released under judicial supervision after being held for 96 hours. The prosecutor announced on Monday morning that he would appeal the decision. "In view of the ongoing investigations, we hope that this man will be held in pre-trial detention," said Jean-Michel Prêtre. "Intelligence suggests that he is in the survivalist movement and is preparing for a third World War by procuring military equipment." The weapons trade can not be ruled out, he added. The suspect, originally from the Calais area, is a convert to Islam, according to reports. The man’s father was also taken into custody on March 30 after police raided the flat at 6 am. According to police sources in Menton, the family had recently moved to the Riviera. Three Kalashnikov rifles were among the weapons seized, together with a large amount of ammunition. The 29-year-old is well known to the police for acts of violence, drug use and theft. 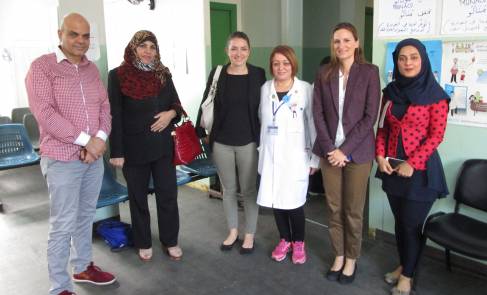 Photo: UNRWA/courtesy of the Principality of Monaco Delegation[/caption] Programme Coordinator, Emilie Silvestre, and Programme Officer, Laetitia Vecchierini, from the Government of Monaco have visited the United Nations Relief and Works Agency (UNRWA) Lebanon Field Office to see first-hand the implementation of Monaco-funded projects. Since 2013, “Improving Diabetes Care for Palestine Refugees in Lebanon” has strengthened the quality of diabetes care, especially in the prevention and early detection of disease complications and associated illnesses. The recent American University of Beirut socioeconomic survey in Lebanon 2015 showed that 6.7 percent of Palestine refugees in Lebanon and 4.8 percent of Palestine refugees from Syria suffer from diabetes, suggesting that this intervention is of critical importance. The Monaco delegation visited the Shatila refugee camp and had the opportunity of meeting and discussing the positive outcomes of the project with trainees at the Shatila Health Centre. The delegation also visited the Beirut Polyclinic, where they witnessed the utilisation of equipment and laboratory kits needed to screen and monitor diabetes mellitus. They also attended a diet awareness session and a discussion with patients about diabetes, how to manage it and how to prevent it through a proper diet. As part of the project, health awareness campaigns were also conducted and education materials, such as posters and pamphlets, were produced to inform Palestine refugees about preventive measures, including advice on diet, risk factors and early symptoms. Thanks to the support of Monaco, 40 medical officers and 35 nurses selected from UNRWA health clinics and centres were trained on the screening, early identification and management of diabetes mellitus by the Lebanese University. “Given a continued shortfall of funds affecting UNRWA’s core service provision, the partnership and support from Monaco to improve health-care services for Palestine refugees in Lebanon is invaluable to the Agency,” said UNRWA Deputy Director, Sebastien Laplanche. Monaco has been contributing substantially to the Agency’s health projects since 2011, initially on cardiovascular care and currently on diabetes. “It is our State’s responsibility to contribute to addressing refugees’ needs and working with UNRWA is one part of our response,” said Bénédicte Schut, Director of the International Cooperation Office in Monaco. The international development policy of the Government of Monaco is focused on fighting poverty. In accordance with national policies of partner countries, Monaco intervenes in three priority areas: health, education and socioeconomic integration. Each year, Monaco provides support to more than 130 projects in 12 partner countries in Subsaharan Africa and the MENA region. UNRWA is confronted with an increased demand for services resulting from a growth in the number of registered Palestine refugees, the extent of their vulnerability and their deepening poverty. UNRWA is funded almost entirely by voluntary contributions and financial support has been outpaced by the growth in needs, making Monaco’s contribution all the more important. (Source: UNRWA)