No vacation for AS Monaco in Portugal

No vacation for AS Monaco in Portugal 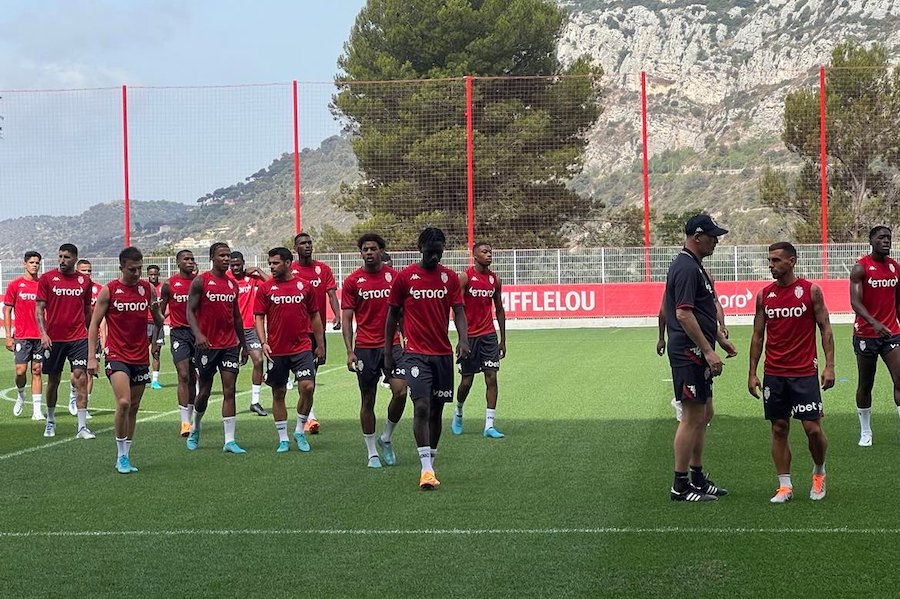 AS Monaco have returned from their week-long training camp in Portugal with their unbeaten pre-season record intact, an enhanced level of fitness and a new member of the squad as the new season approaches.

Monaco will begin the new season earlier than most. Having missed out on second spot in the dying seconds against RC Lens in the final game of last season, the club, like last year, will have to earn their Champions League spot through the play-offs. Preparations are therefore in full swing.

Philippe Clement’s men began their pre-season preparations with a win against Satellite club Cercle Brugge (1-0), before drawing against St Gall (1-1) just a few days later. That unbeaten run was prolonged at the club’s training camp in Faro, Portugal.

Monaco first earned a draw in an entertaining, end-to-end game against Austria Vienna, who finished last season third in the Austrian Bundesliga. After falling behind, Guillermo Maripán levelled before Gelson Martins gave them the lead. The Austrian side hit back to level before the break and neither side could break the deadlock in the second-half.

Following consecutive draws, Monaco returned to winning ways against Portimonense. Clement fielded a strong side for the final game of their training camp in Portugal, as the late-returning international players build up their fitness.

Wissam Ben Yedder opened the scoring just before the break before Yossouf Fofana added a late second to make the victory secure.

The squad’s ranks were also bolstered during their trip to the Iberian peninsula by the arrival of Takumi Minamino. The new €15m signing from Liverpool had “some things to sort out” in Japan before joining up with his new team-mates.

He arrived at the squad’s training camp on Thursday, but understandably didn’t feature in the side’s game versus Portimonense. He has, however, been involved in training with the club. In his first appearance on the club’s social media channels the Japanese international said, “I’m happy to be here and I’m looking forward to experiencing a beautiful season together.”

Monaco now have four games under their belts. Many Ligue 1 rivals, including champions PSG haven’t even played once. The club has a difficult start to the season, as well as an earlier start than all of their Ligue 1 rivals. Whilst their opponent in the Champions League play-offs hasn’t been confirmed, the draw includes European stalwarts including Benfica and Rangers. Whoever they are pitted against, they will at least face them well prepared.

Along with their early arrival back at the La Turbie training centre, Monaco have further fixtures against Inter Milan, FC Porto and Premier League side Southampton before the start of the season in early August.

Pre-season provides a great chance for many of the youngsters and fringe players to stake their claims for a place in the first-team squad. Few have profited from the opportunity more than young Félix Lemarechal.

The young Frenchman signed his first professional contract with the club in May 2021 and last season made one Ligue 1 appearance and one Coupe de France appearance. He spent the rest of the season playing for Monaco B in the N2, which has since become the “elite group.”

During pre-season he has started three out of four of Monaco’s games and has impressed when placed in a midfield pivot. He looked comfortable alongside Youssouf Fofana, and with the departure of Aurélien Tchouaméni to Real Madrid, there is currently a spot up for grabs.

Lemarechal is currently in competition with Jean Lucas and Eliot Matazo for a starting spot, whilst the former can, and has, played higher up the field. Whilst there are significant rumours linking Monaco with midfield reinforcements such as Leicester’s Boubakary Soumaré and Lille’s Amadou Onana, Lemarechal’s performances have forced his name into the conversation.

It remains very likely that Monaco will bring in midfield reinforcements, but should Lemarechal’s form hold until the end of pre-season, there is no reason why the academy product won’t be in-and-around the first team and accrue many more appearances for the side than he did last season.