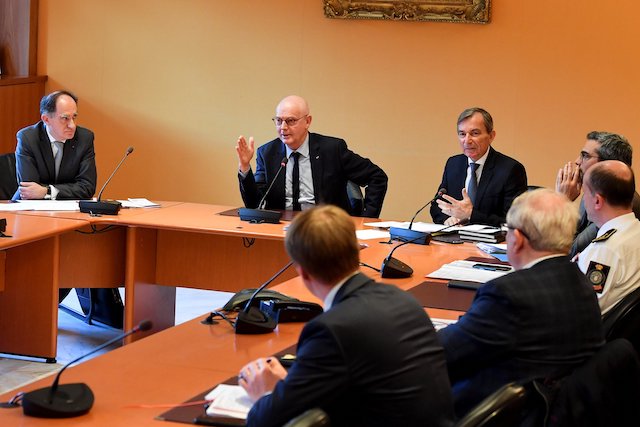 Italy has ordered the lockdown of the entire Lombardy region as well as other provinces, isolating around 16 million people until early April. Meanwhile, Monaco has still registered only one positive case of coronavirus to date.
According to the latest government communication, the eight samples taken on Thursday 5th March were negative. Meanwhile, the only positive Monegasque patient no longer has symptoms and is set to return home in self-quarantine.
During a press briefing on the Covid 19 crisis late last week, Minister of State Serge Telle welcomed “the individual awareness demonstrated by the Monegasque population in the implementation of the measures operated by the Government since 30th January.”

“We remain mobilised and vigilant in the face of a virus which is also having an economic effect, which we must therefore deal with pragmatically,” said Mr Telle. “We have also taken stock with H.S.H. the Sovereign Prince on the consequences of cancelling or postponing professional events.”
Minister of Finance and the Economy Jean Castellini added that there will be no significant loss for the Monegasque economy with regard to cancellations and postponements of congresses and fairs. “In consultation with local professionals and organisers, everything is being done to reduce the impact on the first and early second quarter,” he said. “We are hoping for a rebound at the end of the year, such as the postponement of the Anti-Aging Congress planned for April and now taking place in November.”

Minister of Social Affairs and Health Didier Gamerdinger said that an automated Covid-19 screening device is being tested at the Nice University Hospital, allowing results to be obtained in 35 minutes instead of four hours. “The Principality is now planning to acquire such equipment,” confirmed Mr. Gamerdinger.

For employees in self-quarantine following a stay in a risk zone (nearly 400 people in total between private, public and independent sectors), the Minister said that social security coverage will not apply if a person knowingly goes to one of the identified areas. Meanwhile, once an employee has reached the 7,830€ compensation limit, payments will be reduced thereafter.
With regards to employers, in the event of difficulties and, in particular, a significant drop in turnover, they may request to defer payment of their social security contributions or declare temporary total unemployment (technical unemployment) in order to avoid redundancies.

General Director of the Interior Christophe Prat revealed that absenteeism in schools continued to decrease: 15% absent among students against about 10% at the same time last year.

Just over the border in Italy, Italian Prime Minister Giuseppe Conte announced early on Sunday that the entire region of Lombardy and a number of provinces in other regions were put into lockdown as the coronavirus continued to spread throughout the country.
All public events have been banned, and cinemas, theatres, gyms, discos and pubs all closed.
The new measures will apply to more than a quarter of the Italian population – about 16 million people – and will be in force at least until 3rd April.

Italy has confirmed 5,883 cases, with more than 1,200 reported in a single 24 hours over the weekend. The spread shows no sign of slowing.
The northern regions of Lombardy, Emilia-Romagna and Veneto are the hardest hit, representing 85% of cases and 92% of recorded deaths.
Three new cases of coronavirus have been detected in the Alpes Maritimes: a 54-year-old and 56-year-old from Cagnes sur Mer, and a 63-year-old from La Tour. None are in a serious condition. It brings the total number of positive cases in the region to 19.