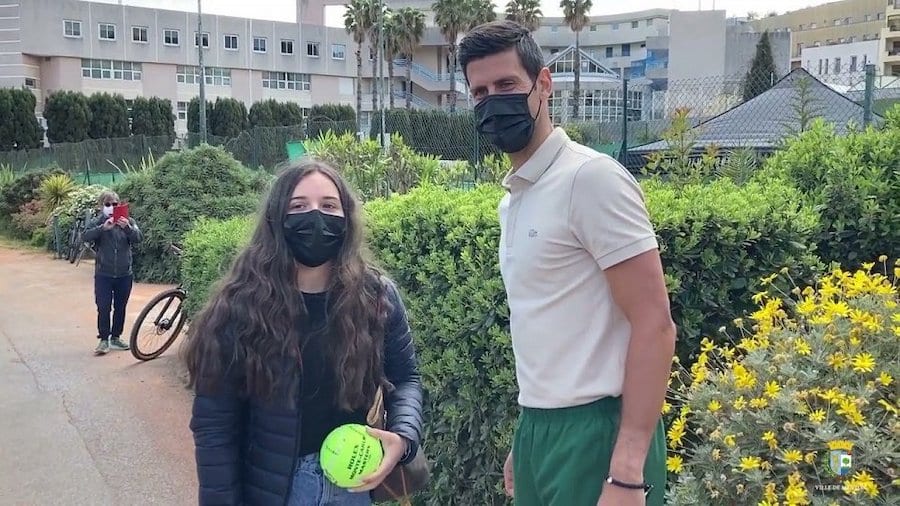 Tennis star and Monaco resident Novak Djokovic spent Wednesday on the courts, but not to train for this weekend’s Rolex Monte-Carlo Masters. He was there to film an advertisement at one of the region’s most historic tennis clubs, the Tennis Club of Menton.
The number one ranked tennis player in the world, Novak Djokovic, spent Wednesday on the courts at the historic Menton Tennis Club filming an ad for a sponsor, where delighted spectators got to watch him in action up close and personal.
“It is he who asked to come back here,” said Gilles Perez, President of the Menton Tennis Club for the past five years. “He had already shot an advertisement on our courts, four years ago. I have fond memories of it, of a very friendly person, great with kids. A bliss.”
The 33-year-old Serbian holds the record for longest time in the number one position, currently sitting at 315 weeks. He has crushed it in 18 Gland Slams and has 82 titles on the circuit.
He spent a few hours on the court batting balls back and forth with 36th ranked Filip Krajinovic at the nearly 120-year-old facility that was first set up by English enthusiasts as one of France’s first clubs. Today, it is a high-performance school where half of the 480 members are children hoping to excel in their chosen sport.
This interlude was a small, but pleasing break for Djokovic, who is in serious training on another clay court only steps away for the Rolex Monte-Carlo Masters this weekend, a tournament he was won two times in the past.
The Monte-Carlo Masters is going ahead behind closed doors. Another beloved tennis tournament, the fabled French Open, has just been postponed a week due to health concerns, it was just announced.
The Grand Slam tournament will now run from 30th May until 13th June, finishing just two weeks before Wimbledon. The postponement was decided upon in the hope that the delay would allow more fans to attend than the limited number of last year, where only 1,000 per day were allowed.
“For the fans, the players and the atmosphere, the presence of spectators is vital for our tournament, the spring’s most important international sporting event,” said French Tennis Federation President Gilles Moreton.
France is currently in lockdown amidst a third wave of rising Covid cases and deaths.