Obradovic out as AS Monaco basketball coach

Obradovic out as AS Monaco basketball coach 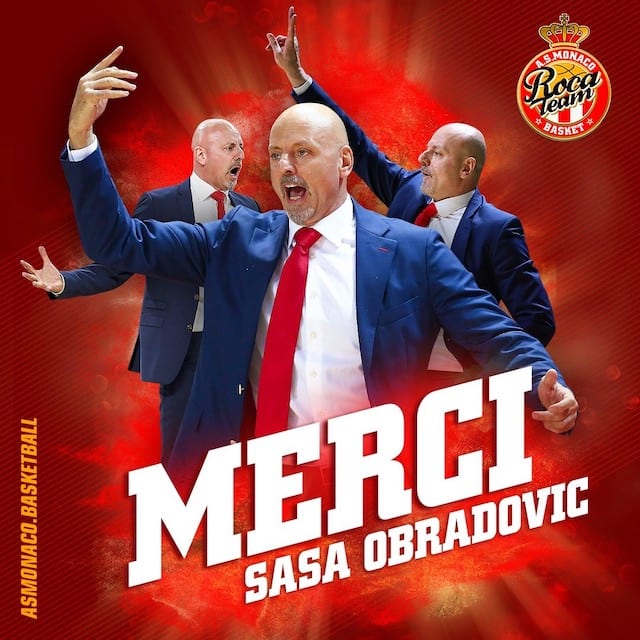 Sasa Obradovic is leaving the Rock to return to his roots as head coach for Crvena Zvezda in his hometown of Belgrade.

The Roca Team will have to say it’s goodbyes to head coach Sasa Obradovic, as he moves onto to become coach of the team that he started his career with back in 1987.

“It was a very difficult decision for me to leave Monaco, but the challenge proposed by the Red Star (Crvena Zvezda) tipped the balance, between competing in the Euroleague and finding the club and the city that saw me start at the highest level,” said Obradovic.

AS Monaco was 9th in the league when he first arrived on the scene in 2019, and the following season saw them at the top of the Jeep Elite standings and finishing first in their group in the EuroCup Top 16, before the season was cut short due to the Covid epidemic.

“My biggest regret is that I was unable to finish the work with the Roca Team. We started on good bases this season to do great things,” said the coach. “I would like to thank the president, the general manager, the Prince, the Palace and the government for making my experience in Monaco unforgettable. I would also like to thank the fans for making me feel at home in Monaco from the start. The room was small, but very warm, and I really enjoyed it.”

He warmly went on to say that, “I’m sure ASM Basket will stay competitive. Each year Sergey (Dyadechko) and Oleksiy (Yefimov) have to rebuild the team because the players generally gain a lot of value in Monaco. But what should give the club credibility is the fact that Monaco has always remained at the top of the bill since its rise in Pro A / Jeep Elite, which is a remarkable fact.”

Roca Team can boast winning every home game in the Jeep Elite league under Coach Obradovic since he came on the scene, and his legacy will not soon be forgotten. The coach’s talent will surely be missed.