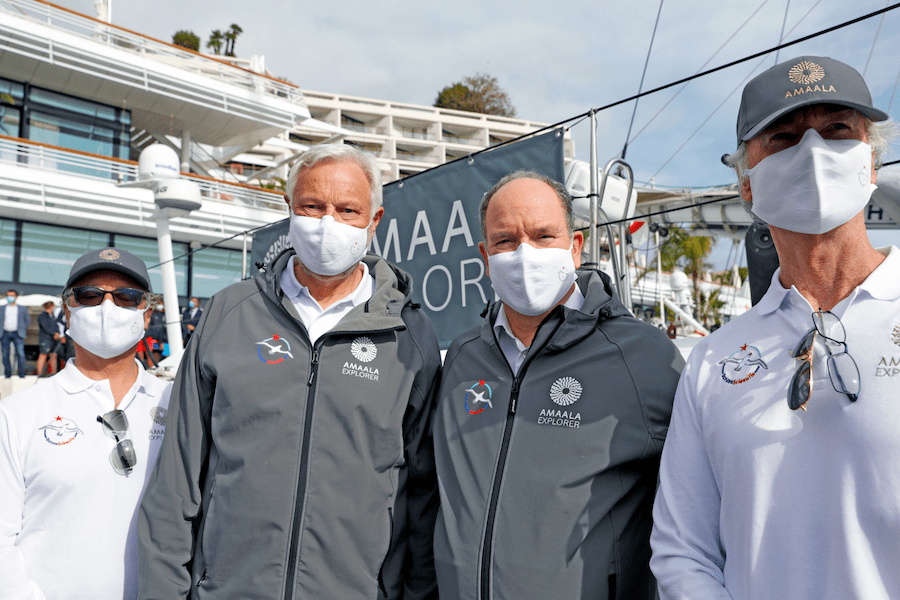 Yvan Griboval and his zero-emission maxi-catamaran ‘Amaala Explorer’, ceremonially launched in October by Prince Albert, has successfully returned to Monaco after traversing 1,500 nautical miles across the Mediterranean collecting chemical contaminant samples.
On 15th October, Prince Albert was on hand to bid the Monaco-based OceanoScientific and its skipper farewell from the marina of the Yacht Club of Monaco.
The Amaala Explorer went on to make port calls in Porto Cervo, Italy; Barcelona, Spain; and La Seyne-sur-Mer, France before returning to Monaco on 29th October.
The expedition was undertaken with a two-fold objective to determine the nature and density of the chemical compounds that affect the marine environment. It also placed a wider focus on the impact of chemical contaminants on the ocean and human health, and validates the applicability of the expedition’s sampling method, using a cost-effective research alternative with a zero-carbon emission vessel.
Over the course of two weeks, the crew collected water samples from various points within a triangle of 1,500 nautical miles in the western Mediterranean.
“While almost everyone has realised that plastic pollution is an appalling scourge on the ocean, we want to show that chemical contaminants – metallic and organic – that pollute the sea and poison the phytoplankton and plankton at the start of the food chain, are found in our dinner plates at the other end of the chain of life,” said Yvan Griboval, circumnavigator explorer and member of the Yacht Club of Monaco.
The samples were handed over to the Institut Français de Recherche pour l’Exploitation de la Mer (Ifremer) by the crew and Amaala Chief Executive Officer Nicholas Naples and Chief Sustainability Officer Brendan Jack at the last port of call in La Seyne-sur-Mer, France. The scientists at the Ifremer, who advised on the scientific aspects of the undertaking, will now quantify and analyse the concentration of metals and elements such as cadmium, lead, nickel and mercury, all of which can alter the composition of the sea and affect the marine food chain.
The expedition and the results unearthed as part of its study will inform Amaala’s own conservation efforts.
“It was important for us to be a part of this scientific expedition because we are creating a new ultra-luxury resort on the Red Sea along Saudi Arabia’s north western coast, and the two seas – the Mediterranean and the Red Sea – are connected,” Amaala Chief Sustainability Officer Brendan Jack told Monaco Life. “So, issues that you would find in the Mediterranean won’t be confined to the Med, they will also be issues for the Atlantic and the Red Sea. We share the sea so we share the same issues, as well as the same solutions that will come about from studies like these.”


In an effort to preserve and nurture the Red Sea’s vibrant coral gardens and rich underwater life, Amaala has forged partnerships with global marine conservation entities, including the Prince Albert II of Monaco Foundation, the Scientific Centre of Monaco, and the Oceanographic Institute.
“We have a vision to not only conserve what we have – and most people struggle to even do that – our goal is to enhance what we have, to increase the terrestrial flora and fauna, the marine flora and fauna, to try and expand our coral reefs, our seagrass areas – habitats for a lot of critical species that use our area,” said Brendan Jack.
The expedition was conducted on the specially commissioned Amaala Explorer, a former record-breaking 110-foot racing maxi-catamaran that was converted into a scientific research ship with zero carbon emissions. It functioned as the expedition’s lodging and lab.
The vessel and expedition were skippered by Yvan Griboval, who worked with a team of scientists specialised in the study of organic contaminants, including an onboard Swedish marine scientist Linn Sekund and Amaala Director of Sports Marc Archer.
“The work that OceanoScientific has done here is something to be applauded and it has just come from people’s personal passion,” said Amaala’s Brendan Jack. “This is not something that has been driven by government or bureaucracy, it is grassroots stuff, and it is this sort of passion that is going to make a difference.”
A short documentary film about the expedition, in English and French, will be distributed in 2021, along with scientific results in late 2021 and scientific publication in late 2023.