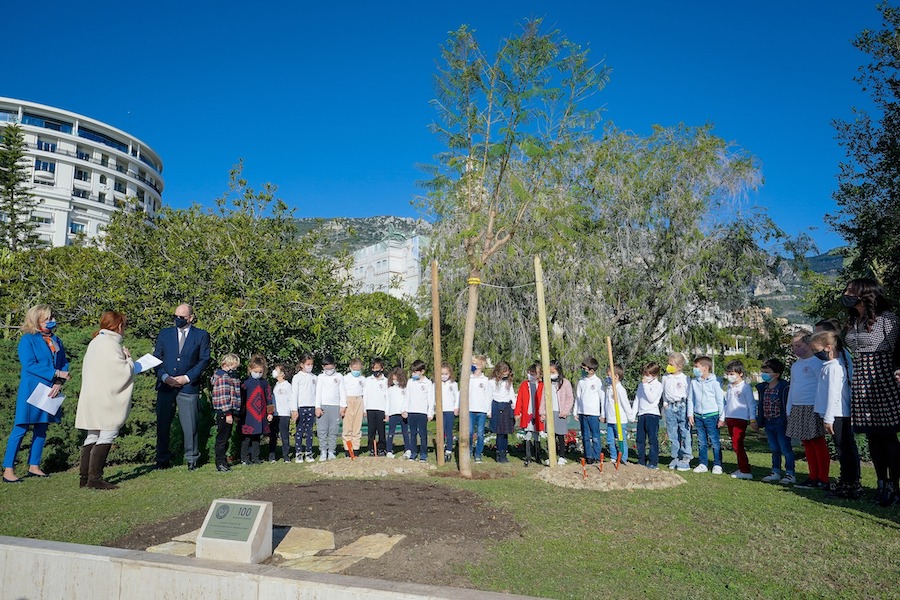 To commemorate the 100th anniversary of the Soroptimist Club, comprised of professional women around the globe, Prince Albert and the twins this week planted a South African jacaranda on the Casino Terraces.

The Soroptimist Club has only been in existence in the Principality for 42 years, but the club itself spans a century, with its first meeting held in 1921.

As a way of celebrating this milestone, the club invited Prince Albert II along with Hereditary Prince Jacques and Princess Gabriella, their schoolmates and a CE1 class from Saint Charles School, to meet on the Terraces of the Casino on Wednesday 24th November to plant a special tree.

The chosen tree was symbolic in itself, a South African jacaranda, which was a nice homage to the roots of the absent Princess Charlene, the twins’ mother.

The Soroptimist Club was founded in the United States and has a long history with trees, their first action back in 1921 being a drive to save a redwood forest led by then president of the club, Violet Richardson.

In Monaco, the club was founded in 1978 and has been very active. It is the originator of the Handiplage project at Larvotto, which allows people with reduced mobility to safely use the beach, the Jeune J’ecoute program, and also provided “support for Madame Claude Pompidou at the time against Alzheimer’s disease, but also for Professor Luc Montagné for research in the fight against AIDS,” said the current President, Yveline Garnier, who heads up the team of roughly 20 women.

Today, the club boasts a membership of 72,000 women in 121 nations. They advocate for human rights and gender equality and have a strong presence in the United Nations where they represent girls and women the world over. Their work is mainly grassroots, and the aim is to empower women in their communities.