Monaco were within just a second of avenging their 2019 defeat at the hands of Asvel, but despite a tighter series that went right down to the wire, Sasa Obradovic’s men once again fell agonisingly short.

Having gone 2-1 up in the series at the Salle Gaston Médecin last week, the Roca Team were within just one win of dethroning the kings of French basketball. The opportunity was missed last Wednesday, as they were played off the court by Asvel, who started quick out the blocks.

The same happened once again on Saturday, as a packed Astroballe roared on the home side to a 17pt advantage midway through the first-quarter (24-7). Slow starts have been a predictable feature in Monaco’s matches, not just in this series, but over the course of the entire season.

What is less predictable is their ability to fight back. Whereas Monaco had no reply for the irrepressible Asvel attack in mid-week, Obradovic’s men successfully weathered the storm to re-find their attacking fluidity and regain control of the game during the second-quarter.

Their comeback wasn’t bombastic, but incremental gains earned Monaco the right to dream of their first French title. By the fourth-quarter, they were within striking distance. Cometh the hour, cometh the man – back-to-back Mike James three-pointers reversed the deficit and gave his side a four-point lead.

A Dwayne Bacon two-pointer left Monaco on the edge of glory. With an eight-point lead, they only needed to hold out for four minutes to cause the upset and deny Asvel history of becoming only the second French side to win three consecutive league titles.

David Lighty halved the deficit with a three-pointer, but Asvel still had work to do, as Monaco resisted. One play away from the title, Élie Okobo picked the ball up, drove into the key and converted a two-pointer with just 1.8 seconds left in the series to level the scores and take it to overtime.

The momentum was with the home side and Okobo gave them a five-point advantage with just over two minutes to go. But Monaco found a second wind and fought back to retake the lead (80-81) thanks to a James two-pointer with less than a minute to go.

After the third match, Bacon told Monaco Life that “defences win games.” And so it proved. On the counter, Paris Lee charged down the court, and looked certain to give Monaco the advantage once more with just 15 seconds on the clock, but a sublime intervention denied the American.

By the skin of their teeth, Asvel clung on to claim their 21st French championship (84-82), and leave Monaco still searching for their first. “I am sad for the supporters and for Monaco, who have been waiting a long time for it,” said Monaco’s Léo Westermann.

A promising season that saw a European adventure, which defied expectations, and another Betclic Elite final ultimately ended trophyless. But there is an irrepressible feeling that this team are on the right track, and should they channel this year’s disappointment in a positive way next season, they could yet dethrone the French champions. But for now, the chance to pull off that feat feels a long way away. 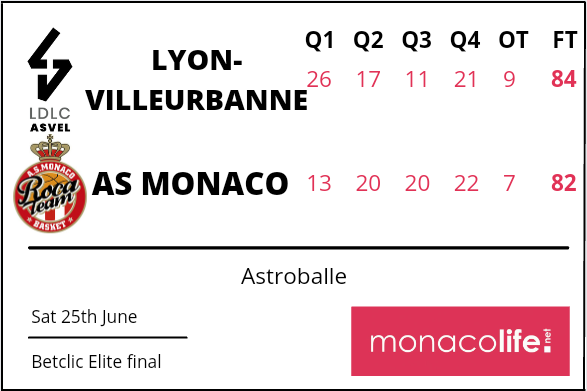