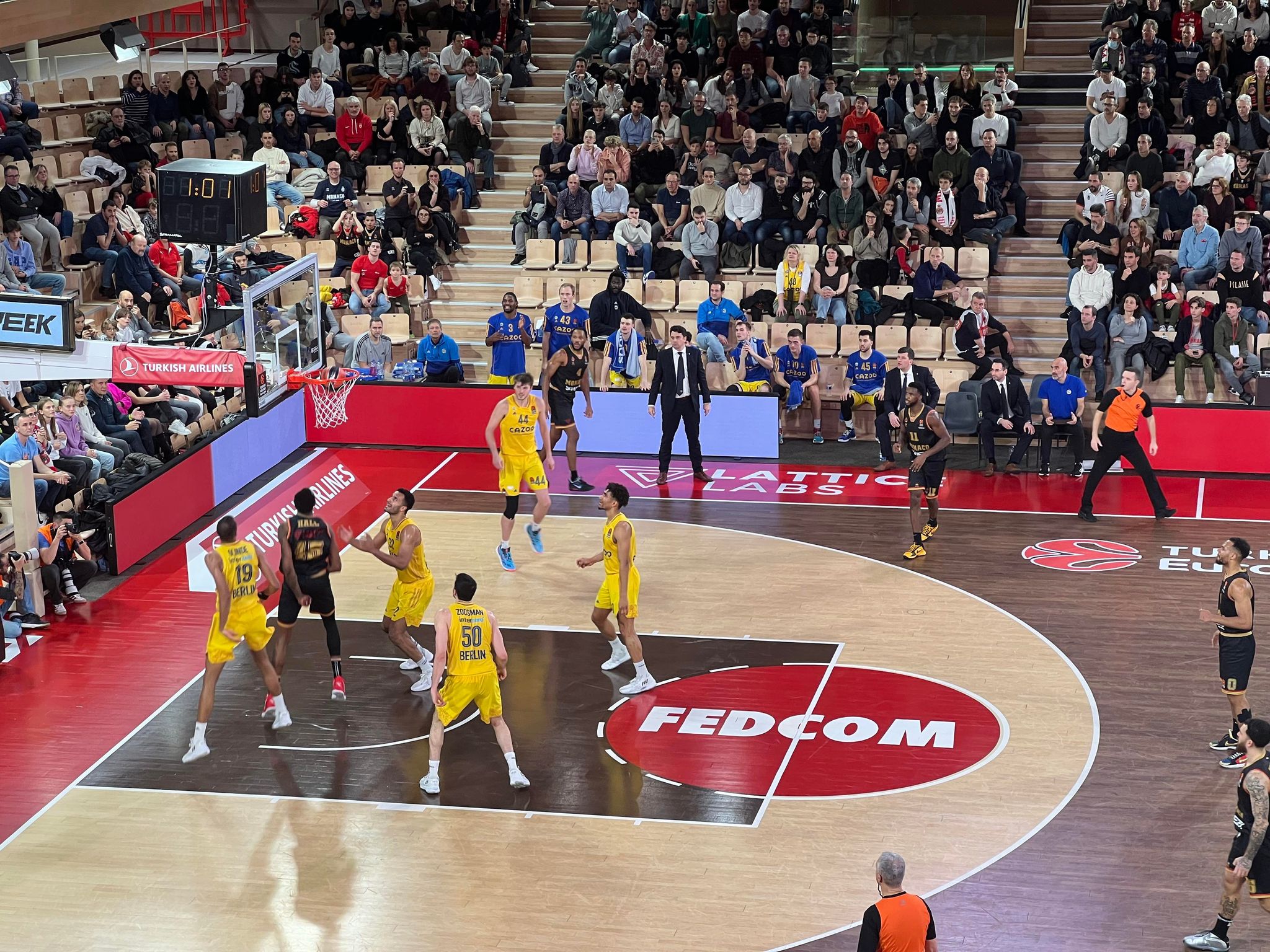 A last-second Elie Okobo three-pointer secured a slender victory for AS Monaco Basketball (92-89), sending them to the top of the Euroleague, in what Sasa Obradovic described as an “improvised” victory.

Friday night’s visitors to the Salla Gaston Médecin, Alba Berlin, arrived in the Principality as the underdogs. The German side were bottom of the Euroleague and had lost their last 10 matches in the competition.

Having marched into an early lead, those in attendance would have been fooled into thinking that the result was a foregone conclusion. Alba clung on to Monaco, showing a strong defensive resistance and taking their opportunities when they came. Tim Schneider, who made all five of his three-pointer attempts was a source of deflation for the Roca Team, who struggled to build a gap.

Holding a seven-point advantage heading into the final-quarter, Jaron Blossomgame (16 points), who also found success outside the arc, made his three-pointer to create a 10-point lead (77-67). However, 12 of the next 14 points would go Alba’s way, with another Schneider T3 giving the away side the lead (77-80).

An Alpha Diallo (20 points) dunk handed Monaco a slender advantage with just a couple of minutes on the clock (85-83). But Donta Hall then missed one of his signature dunks, and parity was then restored with just 17 seconds left on the clock.

Mike James, as he was during the midweek defeat against Barcelona, was largely constrained. Someone else had to step up to prove the match-winner, and that person was Elie Okobo (11 points). The Frenchman took control of the final possession, biding his time before taking his shot from just behind the arc with under a second on the clock. The shot made, the Salle erupted with Prince Albert II and all of those in attendance celebrating joining Fenerbahçe and Barcelona at the top of the Euroleague. All are tied on 10 wins.

With only 48 hours between the two Euroleague matches this week, Obradovic bemoaned the lack of preparation time and attributed this factor to what was an underwhelming, but ultimately successful night of basketball.  “Not having time to prepare the game, meant they surprised us. We improvised because of a lack of preparation. Their defence surprised us. Sometimes we adapted well, other times not so well,” said the Roca Team coach.

On Sunday, and once again with very little preparation times, the Roca Team were in Betclic Elite action. Obradovic’s side succumbed to a surprise defeat to Le Portel (89-81), but still retained top spot in the domestic division.

The game was ultimately lost in the first quarter, during which Monaco were in difficulty on both sides of the court (33-13). A comeback of sorts took hold in the second quarter, and the beginning of the third, but Le Portel regained their grip on the tie having briefly fallen behind.

Despite the defeat, Obradovic’s side remain top with 11 wins. Boulogne-Levallois, led by Victor Wembanyama, look likely to be Monaco’s closest challenger this season, and they are currently one win behind and with a game in hand.