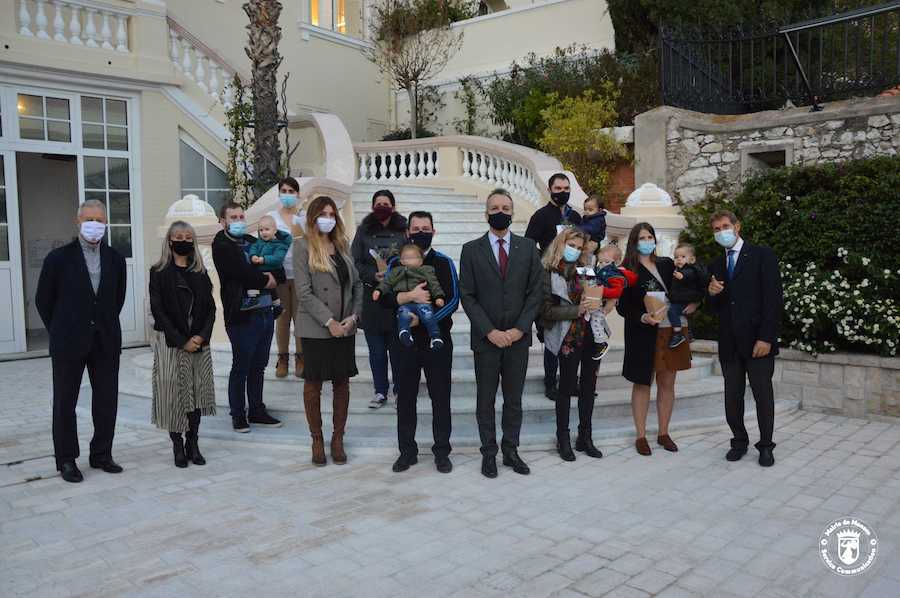 Close to 1,000 trees will be planted this year as part of the One Birth = One Tree programme, co-organised by the Monaco Town Hall.

One Birth = One Tree is this year celebrating 13 years of planting a tree for every baby born in the Principality the previous 12 months.

Unfortunately, the symbolic tree planting ceremony in La Turbie was cancelled this year, however parents and children got together on Thursday 5th November with Monaco Mayor Georges Marsan and other councillors for an official moment in the Cour d’Honneur of the Town Hall.

The mayor welcomed his visitors with a speech reminding them of the Town Hall’s commitment to the environment, particularly through reforestation efforts. These plantings have resulted in a total of 12,727 trees since the programme’s inception that have reforested not only the surrounding villages but also the Val Daluis national forest in the Var. This year, 939 trees will be planted.

The Town Hall gave each family an olive tree, a traditional symbol of peace, strength, victory, longevity and hope. Olive trees are also an important part of Monegasque history, as the cultivation of these trees was a major resource for the people of a bygone era.

“I hope you take care of it and that it grows with your child and will remain the symbol of their birth,” said the mayor in concluding his speech.

One Birth = One Tree was started in 2008 as part of a larger global campaign ‘Plant for the Planet’ and was sponsored by Prince Albert II. It is co-organised by the National Forestry Office (ONF) and the goal is to plant one billion trees in total.

These efforts coincide with the concentrated reforestation efforts in France. In the last 30 years, the country has seen its forests grow by 7% on 16.4 million hectares of terrain. The project has reclaimed land once used for agriculture or industry and ranks fourth in Europe after Sweden, Finland and Spain for the largest forested areas.

Photo provided by the Mairie of Monaco