Decimated by Covid and injury, AS Monaco still managed to ease past Quevilly-Rouen in the Coupe de France on Sunday to seal their place in the round of 16.

The club has experienced great upheaval in the past week, firstly with the sacking of manager Niko Kovac and then by a Covid outbreak, which put seven first-team players into self-isolation. Stephane Nado, stepping in to take charge of the side for this game, must therefore have been proud to witness a professional 3-1 victory against an often stubborn, well-drilled Quevilly-Rouen team.

Sofiane Diop, Axel Disasi and Benoit Badiashile were amongst those absent due to Covid, as Monaco fielded a youthful side with an average age of just 23-years-old. For academy products Felix Lemarechal and Yllan Okou in particular, this was an opportunity to shine in front of the incoming Philippe Clement, who looked on from the stands.

AS Monaco had Radoslaw Majecki to thank early-on, as the Polish goalkeeper made a smart save with his feet to deny Duckens Nazon an opener. Wissam Ben Yedder then spurned a glorious opportunity to open the scoring, but after being put through one-on-one, he could only hit straight at the keeper.

But the French international wouldn’t be denied for long, as just minutes later, Myron Boadu, who was a livewire all night, was felled in the box and a penalty was given. Ben Yedder stepped up and gave Monaco the lead with a well-hit penalty that was just out of the reach of the Quevilly-Rouen keeper, who had gone the right way.

Kevin Volland doubled Monaco’s lead just moments later, converting a beautiful reverse pass from Ben Yedder by chipping it over the on-rushing goalkeeper. The game looked dead as a contest but it was resuscitated just minutes later as Kalidou Sidibe’s sumptuous curling strike from outside the box halved the deficit going into half-time.

Volland doubled-up early in the second-half, with a carbon-copy of Sidibe’s goal. Boadu and Gelson Martins had the chance to extend Monaco’s lead, but the game remained 3-1. Sidibe was sent off later-on for Quevilly-Rouen, in what is rumoured to be Bruno Irles final game as manager before moving onto Troyes.

The travelling Monaco fans were in good voice throughout the fixture, paying homage to the recently departed Kovac by singing his name on multiple occasions.

Ben Yedder also thanked his former manager in a post-match tweet in which he said, “Thank you to coach Kovac for having led us this far, and we hope to go further for him.”

Nado, stepping into Kovac’s shoes, didn’t broach the subject of his recently sacked colleague, as the elephant in the room went unaddressed. He was, however, full of praise for his side. “The boys were professional, conscientious and very engaged.”

Nado is likely to finish his blink-and-you-miss-it stint as manager with a 100% win percentage, as Clement’s arrival is expected to be announced imminently. The Belgian’s debut on the sidelines will undoubtedly come in next Sunday’s trip to Nantes, in what is a must-win Ligue 1 fixture. 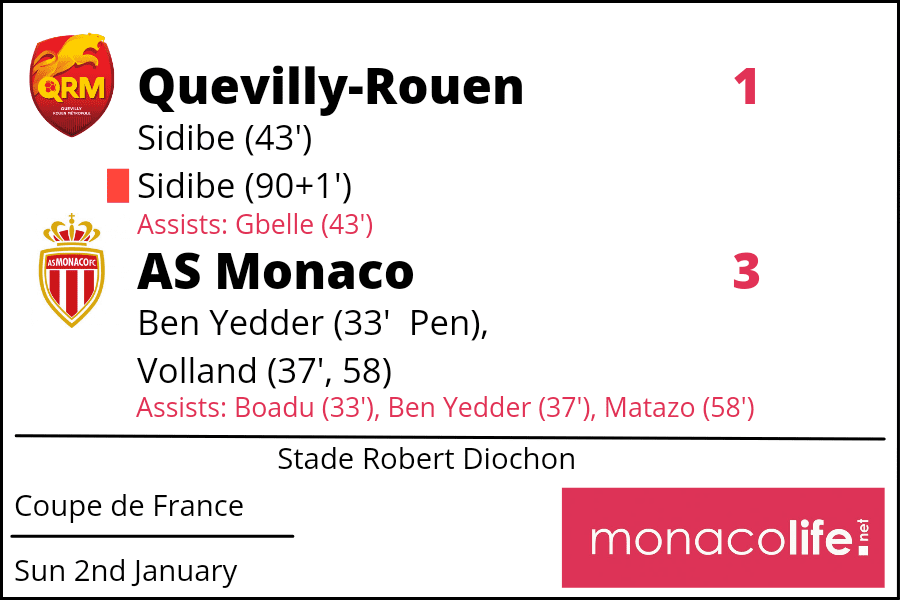 Local News Cassandra Tanti - June 20, 2019
A new committee has been created in Monaco to regulate security standards within the luxury sector.