The Opera de Monte-Carlo is informing ticket holders of a change of access to the opera house on Thursday, January 25, from 4 pm to 8 pm.

Due to the official start on Thursday of the Monte-Carlo Rally at Place du Casino, anyone attending the evening performance of Contes d’Hoffmann should note access to the event will be modified between 4 pm and 8 pm.

To park in the Boulingrins car park (Casino car park), drivers will have to pass through the upper entrance of the car park on boulevard des Moulins.

Pedestrian access will be along the Café de Paris.

The planet is officially at its hottest 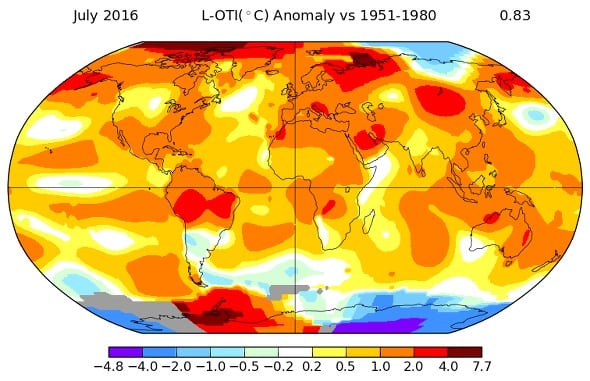 The earth reached its highest monthly temperature in 136 years of record keeping in July.

Last month was the 15th straight month of recording-breaking temperatures in America’s National Oceanographic and Atmospheric Administration’s analysis and 10th-straight in NASA’s, passing the previous hottest Julys by substantial margins.

“It’s a little alarming to me that we’re going through these records like nothing this year,” said Jason Furtado, a professor of meteorology at the University of Oklahoma.

“Each month just gives another data point that makes the evidence stronger that we’re changing the climate,” added Simon Donner, professor of climatology at Canada’s University of British Columbia.

July is usually the hottest month of the year, as it coincides with the peak of summer in the Northern Hemisphere. But this July was more than 1.5 degrees above average in both NOAA and NASA’s analyses.

“July 2016 was the 379th consecutive month with temperatures at least nominally above the 20th century average,” NOAA said. Most of the planet’s land and ocean areas were warmer than normal in July. Parts of the Arctic were more than 7°F (4° Celsius) above average.

“Warmer- to much-warmer-than-average temperatures were observed across much of all land masses, with record warmth observed mainly across parts of Indonesia, southern Asia, and New Zealand,” NOAA said.