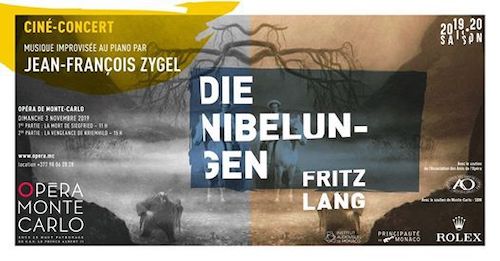 A silent film made in 1924 by Fritz Lang and his wife Thea von Harbou will be shown at the Salle Garnier of the Monte-Carlo Opera next month, accompanied by Jean-François Zygel on piano.

The film, called Die Nibelungen, is an epic tale in two parts and is considered a German masterpiece. It was inspired by the Wagner opera, Der Ring des Nibelungen based on a 13th century German poem.

The story tells the tale of a German prince whose untimely murder leads to a series of battles and the general destruction of all who are associated with him.

The screenings will be held on Sunday 3rd November. Part one will start at 11am and part two begins at 3pm. For more information, go to the Monte-Carlo Opera’s website at www.opera.mc

Later in the month, on 22nd and 23rd November, the Théâtre des Variétés is hosting two incomparable evenings encompassing a magical triptych of dance, music and art.

Musical duo Nouvelle Philharmonie will perform a variety of pieces from known composers as well as a selection of their own compositions.

An exhibit by Belarusian artist Pavel Tatarnikov will be on display, with paintings based on Belarus folk legends and the country’s most beautiful castles and cities.

Finally, the Belarusian State university of Culture and Arts will perform Chancel, a contemporary dance spectacle from the school’s choreography department.

For tickets and information go to www.fnacspectacles.com