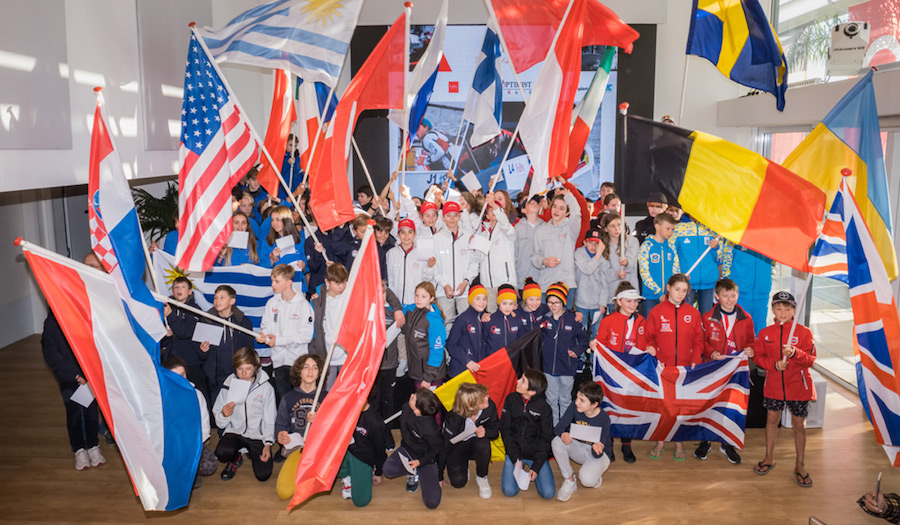 The Monaco Optimist Team Race 2020’s exciting conclusion saw the Americans in the top spot, followed by Sweden and Monaco.
Organised by the Yacht Club of Monaco, the 11th edition of the Monaco Optimist Team Race gave sailors aged 14 and under from all over the globe the chance to compete against each other, just like the adults.
The event has become a staple of team racing calendars, putting young racers in a competitive, yet safe, environment, racing on a real course against 20 teams from 19 countries, with a total of 80 sailors.
Over four days of racing, the teams were exposed to changeable conditions, with winds varying between 6 to 15 knots on heavenly flat seas. In all, 207 matches were raced without the need for a pause.
An International Clinic run by world team expert Chris Atkins, who also doubled as one of the 14 referees, was given on Thursday before the start of the races. Monaco, Germany, Ukraine, China, The Netherlands and France were all able to take advantage of this opportunity, giving them an incredible run-up to the main event.
The teams also had three days of workshops to teach them proper starting procedures, race rules, communication and teamwork guidance.
In the end, the Americans were determined to better their position over last year’s third place and did so with flying colours. Losing only two of 19 matches, they dominated the courses, leaving the 2nd and 3rd place spots up for grabs. Monaco was at the top of the heap but vacillated between 3rd and 4th until the exciting last day when the Monegasque team snatched the bronze from the Ukrainians.
The race is meant not only to inspire a competitive spirit, but also a peaceful one. New friends are made amongst the young participants and the values that sport upholds are instilled.
“It’s always an honour and absolute pleasure to host this regatta,” said YCM General Secretary Bernard d’Alessandri. “We are pleased to continue working on this format, the team spirit concept of which is much more advanced than at other events.”