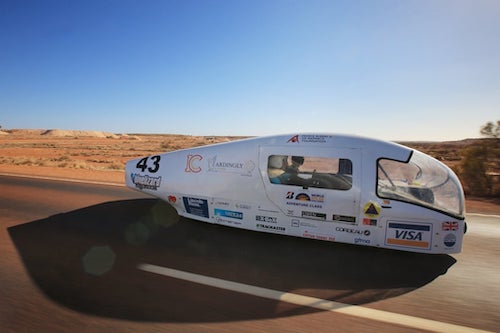 A solar car sponsored by the Prince Albert II of Monaco Foundation has come second in the Adventure category of the grueling Bridgestone World Solar Challenge held recently in Australia.

Under the direction of Dr. Andrew Spiers, the team from Ardingly College – a school in West Sussex, England – participated in the Solar Challenge from 13th to 20th October in their PA2F-sponsored solar car. It competed in the ‘Adventure’ category, which took them 3,000 kilometres across harsh dessert between Darwin and Adelaide.

In extreme conditions, the Ardingly Solar Car managed to cover 1,300 kilometres with solar energy alone, while the remaining kilometres were completed with electric energy.

Despite sandstorms and temperatures above 42 degrees Celsius, the team finished second place in its category. It was a great victory for the Ardingly College team, who had spent the past four years putting together the ambitious technological project.

The famous Australian race challenges students to develop their skills and encourages the design of innovative products adapted to the market. It also serves as a bridge between their studies and their future careers.

A lightyear away from conventional cars