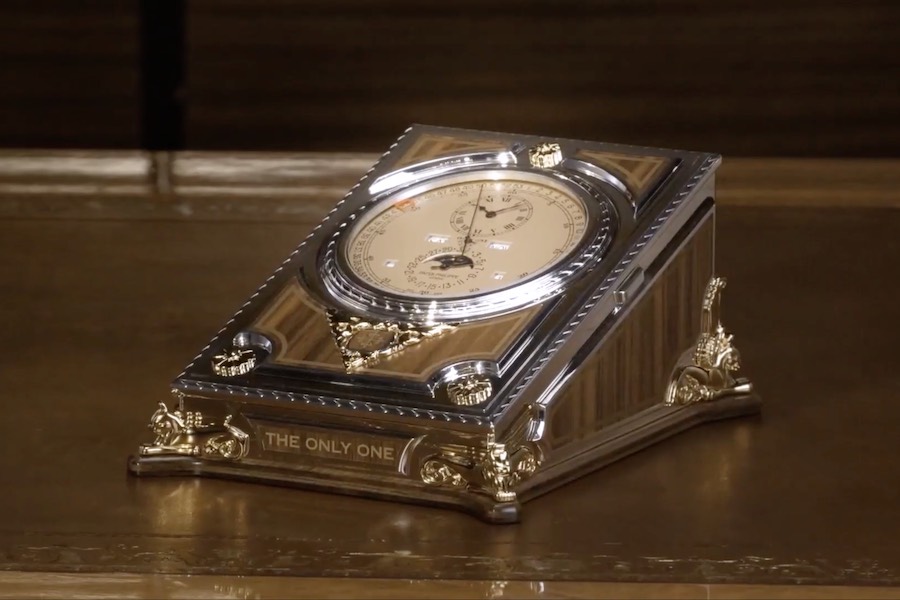 Only Watch, the yearly charity watch auction under the patronage of Prince Albert II, raised an incredible €28.3 million for research into Duchenne Muscular Dystrophy, a childhood disease that renders patients wheelchair bound by age 12 and proves fatal in most cases by the late 20s.
It wasn’t a watch, but it was still an utterly gorgeous timepiece.
A Patek Philippe Complicated Desk Clock, inspired by the one given to American automobile tycoon James Ward Packard in 1923, was auctioned off at Only Watch in Geneva on Saturday and was by far the highest seller of the day. An intense bidding war saw the clock sold for CHF 9.5 million (€9 million), a far cry from the astonishing record breaking 2019 sale of a Patek Philippe for €28 million, but still a good price, nonetheless.
The ornate clock features perpetual calendar and a moon phase but, unlike Packard’s original, adds a peripheral week-number display and a leap year and power reserve indicator. The case is made of sterling silver with American walnut inlays and vermeil detailing to create rosettes and sphinxlike creatures which adorn the clock.
Other big sellers on Saturday were an AP Royal Oak that went for CHF 3.1 million (€2.9 million) and an FP Journe for CHF 4.5 million (€4.25 million).
Prince Albert II was on hand for the event, which sees 99% of all proceeds go directly to research projects focused on Duchenne Muscular Dystrophy, such as state of the art gene therapy and drugs targeting the mutated genes.
“We don’t often take the time to reflect on progress and science,” said Luc Pettavino, President of the Monegasque Association against muscular dystrophy and whose son Paul suffered from the disease. “We are on the cusp of a clinical trial of a therapeutic solution that was developed with funding from Only Watch, you are relieving illness. To all of you, the Only Watch community, you have my deepest gratitude.”
Five of the 54 timepieces sold at the event, which was in collaboration with Christie’s, fetched over a million euro, and in total, Only Watch raised €28.5 million. This brings the grand total to nearly €100 million raised in the nine editions of the charity event.