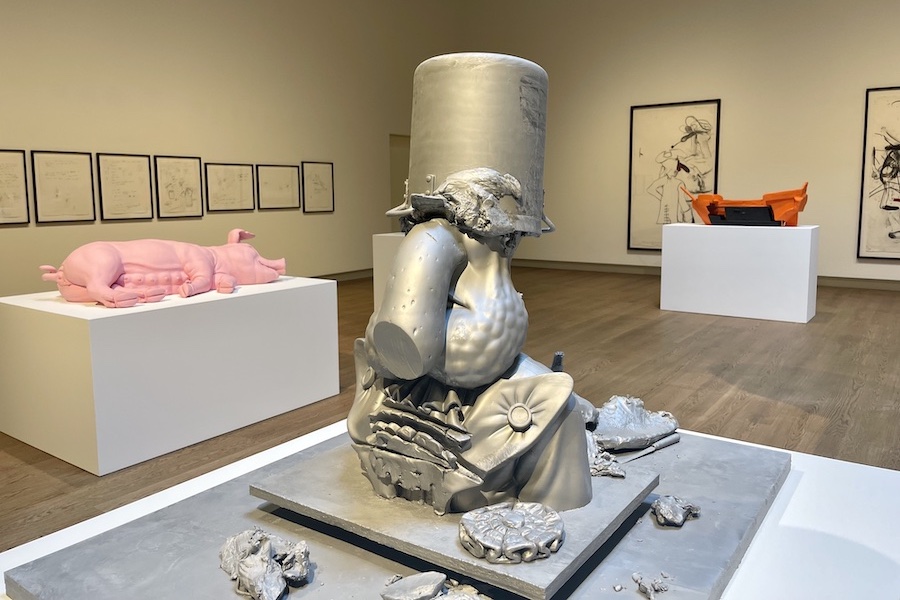 Hauser and Wirth’s new exhibition by Paul McCarthy is a timely reflection on the links between violence, depravity and masculinity, despite the 20 years that have passed since its inception.

‘Paul McCarthy. Pirates Stew Pot’ at Hauser and Wirth Monaco marks the 20th anniversary of McCarthy’s Pirate Project. One of his most important bodies of work, the show highlights the artist’s dedication to this theme across multiple strands since 2001. Originally stemming from Paul McCarthy and his son Damon’s fascination with the Disneyland amusement park attraction ‘Pirates of the Caribbean’, the selection of works includes sculpture, drawing, video and photography, and explores the complex universe of the pirate theme.

McCarthy’s pirate world offers an allegory of society, focusing on a range of unrestrained behaviours or forms of resistance, from untrammelled greed, rampant commercialisation and social ostentation to sadism, perversion, anarchism and corruption. Two decades after its inception, the work continues to be relevant in the context of current global conflicts for the way it addresses the links between violence, depravity and masculinity.

“Paul thinks it is very relevant to show the exhibition at this time because of the context of the war on Ukraine,” Gregoire Schnerb tells Monaco Life. “The series started in 2001 when George W. Bush decided to invade Iraq, and throughout the work of Paul, there’s been a denunciation of the American society and all its kitsch; all the positive images it conveys and the parallel with war. On the other hand, there is the image of celebrity, beauty, and wealth, contrasted with imperialism and violence.”

“It is the second exhibition that we have here in our Monaco space and it is important for us to show the work of Paul McCarthy, to show exactly what the gallery is about,” adds Schnerb. “McCarthy is a central artist and part of our DNA. The artists that we show are linked, and he is representative of the values that we have at the gallery.”

Utilising playfully oversized characters and objects, sculptures such as ‘Piggies, Painted’ (2008/2018) and ‘Paula Jones, Painted’ (2007/2018) merge the fantasy Pirate world with figures from the real worlds of politics, philosophy, science, art, literature, film and television. McCarthy locates the traumas lurking behind the American Dream, presented as a Hollywood or Disney-style stage set gone wrong, and identifies their counterparts in the art historical canon.

The exhibition also celebrates ‘Caribbean Pirates,’ an immense two-volume artist’s book by Paul and Damon McCarthy, released in 2019. It details the ongoing endeavour of the Pirate Project, an acclaimed example of McCarthy’s multidisciplinary practice, through photographic documentation and production stills of the performance alongside a text by the artist and an essay by John C. Welchman.

The exhibition will run until the end of summer.