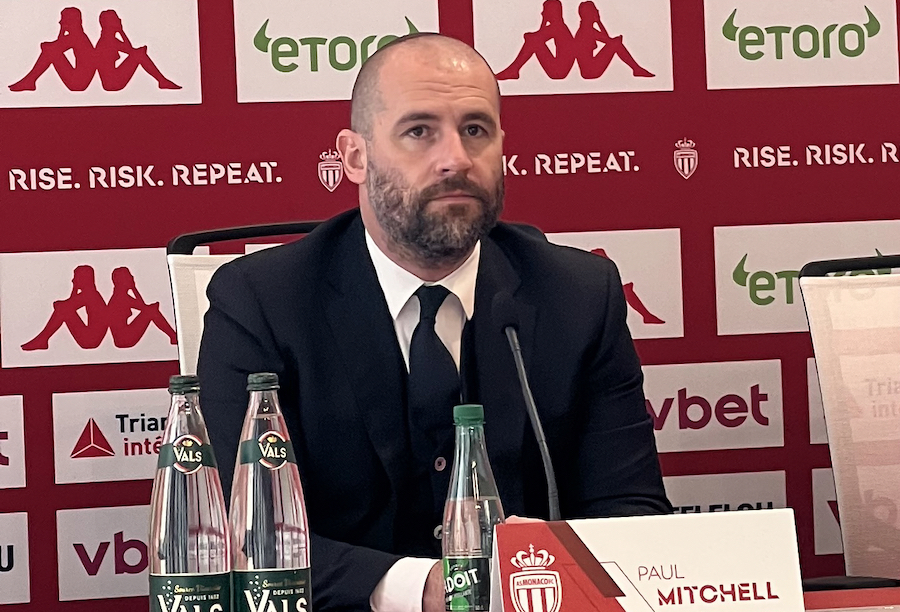 Between Benoît Badiashile’s €40m departure to Chelsea, Eliesse Ben Seghir’s explosion onto the scene, and a growing list of academy debutants, it’s clear that youth is once again the centrepiece of the AS Monaco project.

World Cup winners Thierry Henry, Lillian Thuram, David Trezeguet, Emmanuel Petit and, more recently, Kylian Mbappé all came through the Principality side’s academy. It was a winning formula, but one that was altered over time, and while it brought success in the short-term, it wasn’t sustainable.

A much-needed top-down correction was needed and was initiated by the club’s owner, Dimitri Rybolovlev. The change has been all-encompassing and holistic, and, at least on a sporting level, is being led by Paul Mitchell – the club’s sporting director, who joined in 2020.

For the English sporting director, the trajectories of Benoît Badiashile and Aurélien Tchouaméni, who left for Real Madrid in the summer, exemplify the club’s return to what he has previously described as a “historic strategy” of developing youth talent.

“I think when I arrived two and a half years ago, it was well-documented that we lost a bit of focus and vision on our strategy. One of the elements that we recognised was mainly suffering was the academy. There weren’t as many academy players moving from the academy platform to the first team. We were externally recruiting en masse, we spent an awful lot of money, and [change] was one of the key topics and objectives that the owner set for me when he hired me to become the Sporting Director,” says Mitchell.

He continues, “Benoît and Aurélien are interesting profiles because, in the game before the Covid break, they were both substitutes so it’s really intriguing. From a strategy that had lost its way a little bit, you recalibrate, you apply these principles of performance and clarity around wanting to develop talent like Monaco historically has, and you take that player from being a substitute to playing for one of the biggest clubs in the world.”

Badiashile wasn’t the first, and nor will he be the last to leave for such a fee. The Principality club has a reputation and a precedent for receiving big money for their players, whether they be academy graduates or players that have been bought and developed at Monaco. Could the young Eliesse Ben Seghir, who burst onto the scene with a brace against Auxerre on his Ligue 1 debut in December, be the next graduate to fetch a high price?

“He definitely is that modern offensive profile. He is fearless in possession, he’s not scared to take a risk, to try and get past, to penetrate. Already as a young man, he is a bit fearless. What I like about him is – and this is a really good sign of what could be to come – when the team is under pressure to find solutions, he is more than open to taking that responsibility at the age of just seventeen, to go into tight areas, areas of the final third that are dangerous, that are tight, and find the solution,” says Mitchell.

His break-through is a testament not only to his ability, but to the work behind-the-scenes at the club: from recruitment to regimes, training programmes, and perhaps most importantly, a recent re-structuring of the academy’s schedule.

Prior to the beginning of the 2022/23 season, Monaco took their reserve side, which houses many of the club’s brightest academy products, out of the National 2, and created the “Groupe Elite.”

The creation of this team, headed by Damien Perrinelle, allows Monaco’s academy players to compete against Premier League sides such as Manchester United and Arsenal. Whilst giving the players a crucial formative experience within a different context, the less rigid schedule allows the youngsters to integrate more into the first team.

Ben Seghir is the beneficiary of this structure, but also of a culture of transparency and interconnectedness, at the club. Mitchell often attends academy games in-person, and was at that game at Old Trafford in November, where Monaco won 2-0. He can also watch the Elite Group’s home matches from his office at the club’s new training centre in La Turbie, which offers an expansive view of the entire Riviera, not that you would know it. The view is concealed by blinds, only the windows leading onto the pitches are unobscured, meaning no details are missed, no progress unrecognised.

Monaco, as it historically has been, is a place where progress is recognised and rewarded. 13 academy players have made their debuts since Mitchell’s arrival, and with youth development once again the “centrepiece” of the project at the club, this figure is only likely to rise further in the coming months. The conveyor belt of talent at the Principality club shows no signs of relenting.