Paul Mitchell: “We have to push and be better this year”

Paul Mitchell: “We have to push and be better this year” 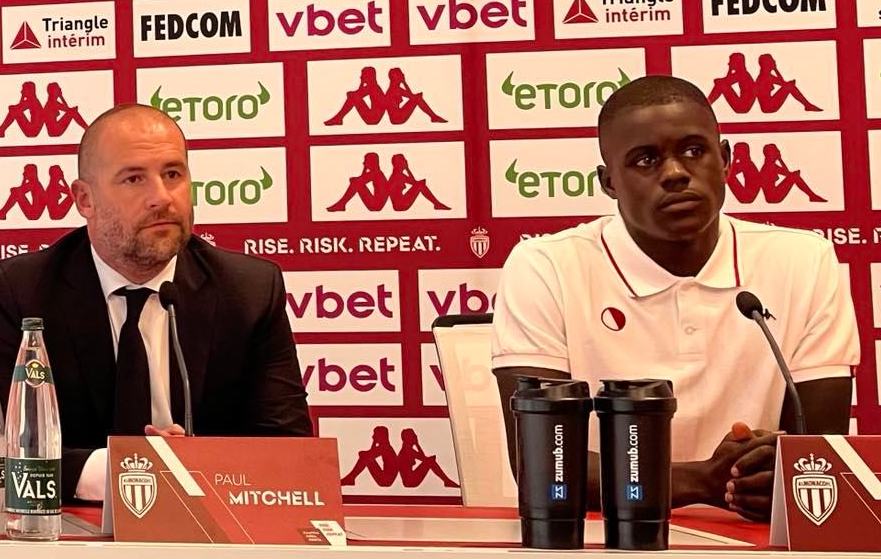 AS Monaco will once again compete in the Europa League this season, and speaking during a recent press conference, sporting director Paul Mitchell outlined the club’s objectives heading into the campaign.

Since Thursday’s conference, Monaco have signed Mohamed Camara from Red Bull Salzburg on a five-year deal. Whilst it is unclear whether Monaco will continue to add to their squad before the beginning of their Europa League campaign on 8th September, sporting director Mitchell did nevertheless tell Monaco Life that the club are always active in the market:

“We’re always active until the last moment. Like I say, my job is to bring together the best collective group we can have. We’re in three competitions; we know that rotation will be as important as ever. We need to bring an arsenal of quality to the coach’s fingertips for when he makes his selection. I think we’re in a very, very good way already, but as always, we’ll be on the market,” he said.

The arrivals of Sarr, and in particular Camara, came after Monaco’s second-leg defeat to PSV Eindhoven, which consigned the club to consecutive campaigns in the second-tier of European competition. However, Mitchell doesn’t perceive the timing of the transfers, more specifically, the signing of a number six, as a factor in their elimination.

“In terms of the number sixes, I would suggest that the performances of Eliot Matazo and Youssouf Fofana would answer that question. Between the two of them, it’s the best I’ve seen them play, especially in Eindhoven. I thought Youssouf was incredible, and that’s the best performance he has delivered for this organisation. I thought the same for Eliot. I thought they were both playing at a high, high level in a big contest. Would a player, or the wrong profile have helped or produced a better performance than those two? I seriously would doubt that,” said Mitchell.

Last season, Monaco’s failure in the Champions League play-offs seeped into their league form, and if Monaco hope to challenge PSG for the title, or secure that elusive second-place, they must avoid a repeat this time around. Mitchell delved into the reaction to that loss in Eindhoven, but stressed the importance of consigning the result to the past:

“I think directly after the game, I think everyone from the President to myself, to the coach, to the players, to the staff, and even Malang who had not yet signed, felt a level of disappointment. I think our performances across both games deserved more, but I’ve been in football a long time and I know sometimes that you need a little bit of luck. I don’t think on this occasion we quite got it. Then the disappointment turns to pride, pride in the performance, pride in the actions, pride in the qualities and the level that the team showed, their application to try to win the games, and when I started two years ago, this is what the fans asked from me. They wanted a team that, even in times of defeat, they could be proud of. I think as the hours passed by, that disappointment turned to pride and pride in the performance that we put in,” he said.

“We have to close the chapter. We had a de-briefing this morning, we analysed as always, all of yesterday, on the flight back in the hotel, and now we have to draw a line, look and think forward and focus on this season’s ambitions,” he continued.

Debatably the low point of last season was the aggregate defeat to Braga in the Europa League group stages in mid-March. This season Mitchell has made progression from the group a clear objective, whilst, by calling on the side to “be better” this season, it can be fairly assumed that his aspiration is for the club to get past the round of 16.

We saw Glasgow Rangers and Frankfurt fight out a great final last year. I think one of my moments of reflection in the whole season was probably the two games against Braga. I think we could have performed better. I think we could have given a better reflection of ourselves over the two games. We have to push and be better this year. With the squad that we have, with the quality and the depth that we have, we have to try and be better and put in the performances across the group stage and then hope that we can then proceed to the knockout stages and then, at that point in time, you’re in the competition. Let’s see where that can take us,” he said.

And Mitchell thinks that the side are prepared to push on this season, citing the team’s enhanced physical conditioning and recruitment as key improvements relative to last year’s campaign.

“I think we lived in the emotion of last year’s game for too long. I think it had a real effect. I think the physical levels of the team weren’t up to the appropriate levels to play three times a week. I think we’ve already seen from the three games we’ve played that our condition and the condition of the team is very high, both physically and mentally. I feel as though the quality and the depth of the squad is in a much, much better place than last year. So, these factors combined can hopefully lead us to have what has already been a good start against Strasbourg into future good games in the coming weeks,” he said.

Monaco will find out their group stage opponents during the draw on Friday 26th August. But it isn’t just their upcoming opponents that for now remain a mystery, but also the dates that they will face them. Europa League matches traditionally take place on Thursday night’s but should local rivals OGC Nice beat Maccabi Tel Aviv and qualify for the Europa Conference League, those timings come into question.

UEFA regulations on two local clubs playing in European competition on the same night read as follows: If more than one club from the same city, or within a radius of 50km (31 miles) of each other, is taking part in any of the UEFA club competitions and/or plays in the same stadium, and if the association and the clubs concerned explicitly declare when entering the clubs that their matches cannot be played on the same day or on consecutive days, the UEFA administration may alter or confirm dates and kick-off times in accordance with the principles set by the Club Competitions Committee.

Asked if they would look to change the timings of their Europa League matches should Nice qualify for the third tier of European competition, Mitchell replied:

“We’re starting to discuss internally since the result on Tuesday night. It’s a conversation for the president, the CEO Jean-Emmanuel (de Witt) and myself to liaise with UEFA to see what the best practical solution could be in that circumstance.”

Whilst uncertainties over the upcoming Europa League adventure remain, the excitement for it is palpable – the need to build on last season’s underwhelming campaign clear.