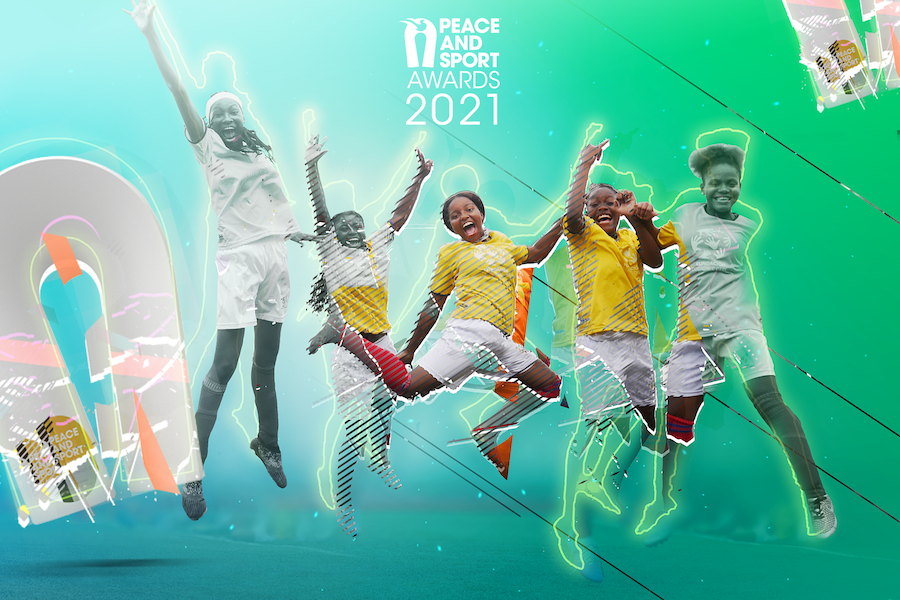 Peace and Sport, the organisation aiming to build safe and cooperative communities through the power of sport, has nominated the initiatives for this year’s Peace and Sport Awards, including one category that requires the help of the public.
From specific field programmes to global projects, nominees for the Peace and Sport Awards are doing their part to promote harmony, unite communities and create dialogues amongst people with religious, political or ethnic differences through the use of sport as a healthy outlet.
The 2021 Peace and Sport Award nominees have been selected for their individual initiatives in three categories, those being the April6 Initiative of the Year, NGO of the Year and Institution of the Year.
The mission of both the organisation and the awards is to provide a platform for stakeholders on sport for development and peace to connect and to generate more cooperation for the development of peace through sport programmes.
“Over the past year, in a context marked again by the global health crisis, stakeholders in Sport for Peace have continued to use sport for social good and they have made a huge contribution to the peace-through-sport movement,” said Joël Bouzou, President and Founder of Peace and Sport.
“The nominees of this 2021 edition have led inspiring projects that are symbolic of sport’s capacity to bring dialogue within and between communities. Through the awards, we will come together to celebrate the unique power of sport. We will highlight and reward with five prizes the incredible vitality and inventiveness of sport for peace initiatives. These awards showcase best practices, so they can be duplicated to amplify our impact.”
The jury is comprised of notable sport figures such as athletics gold and silver medalist Mutaz Barshim, first captain of the Palestinian women’s national soccer team Honey Thaljieh, European gymnastics champion Samir Ait Said, athletics Olympic silver medalist Charmaine Crooks, athletics Olympic bronze Medalist Muriel Hurtis, and world karate champion Laurence Fischer, who will make the difficult choice of narrowing the field down to a single winner in each category.
The nominees for the April6 Initiative of the Year were selected through their contributions, as an individual or an association, to the celebration of April6, the International Day of Sport for Development and Peace. Through a #whiteCard campaign or an awareness-raising event on the use of sport as a conduit for peace.
This year’s nominees are the Cape Verdean Olympic Committee for their ‘Sport for Development and Peace Celebrations’. The operation brought together local Olympic clubs from five Cape Verdean islands who organised multisport events and conferences to celebrate April6.
The next to be nominated in this category is the Mexican Ministry of Foreign Affairs with their ‘April6 Virtual Race- Forum: Diplomacy and Sport Cooperation in a World in Turmoil’. The initiative was launched by the Institute of Mexicans Abroad platforms and the Technical Council for Diplomacy and Sports Cooperation in a virtual event asking participants to run wherever they could, indoors or out, for either three, five or 10 kilometres whilst raising their #White Cards in a symbol of Solidarity. Several countries caught wind of the occasion and joined the over 20 million people already in the Mexican diaspora.
Last is the World Rafting Federation Digital Awareness Campaign, ‘Be White Water’. The organisation aimed to give voice to meaningful stories of respect, sharing and inclusion that are at the heart of the rafting community. Rafting enthusiasts and pros the world over shared their stories of how the sport has fostered gender equality and social inclusion, bringing unlikely people together to work as teams.
The NGO of the Year Award gives an NGO that invests in sport as an educational and social method for lasting peace.
The nominees are the International Federation of Red Cross Red Crescent Societies with their ‘Uniting through the Power of Football’ project. The programme combines the Football for Development project and the IFRC’s youth leadership program, Youth as Agents of Behavioural Change in order to create leaders of tomorrow and promote social entrepreneurial skills to some of the world’s most vulnerable children. They do this through football activities, training courses, psychological and financial support, and workshops.
The second nominee in this category is Malaika for the ‘Malaika Community Centre’. Founded in 2007 by Noella Coursaris Musunka, an international Congolese/Cypriot model and philanthropist, Malaika has grown into an all-encompassing ecosystem, impacting thousands of lives each year through four core programmes. Free access is given to the whole community and the association has created a school to educate 400 girls. Additionally, they have purpose built a community centre, a sustainable agricultural programme and a clean water programme.
Finally, the ‘Inclusive Sports Unite’ programme by Dunk Grassroots in on the shortlist. This NGO mobilises and empowers children from poor urban communities in Ghana using sport. It promotes social cohesion, gender equality and education, building life skills to help these kids grow up to be peaceful and collaborative adults. The programme focuses on basketball and football, organising activities and tournaments as well as supporting after-school and leisure programmes as well as organising internship opportunities.


The Institution of the Year nominees have been noted for being a public entity, such as a government, region, company or state, that contributes to the projects that use precepts of peace through sport.
The Portuguese government’s Sports and Youth Secretary of State is first up with their ‘National Plan for Ethics in Sport (NPES)’. The initiative is based on training and education, focusing on primary and secondary education teachers. Sports practice and events encourage the experience of ethical values of peace such as sincerity, friendship, respect, loyalty. Publications, Research and Digital Platform dealing with scientific studies; awareness campaigns on Radio, TV and the ‘Fairplay Card’ aim to recognize relevant attitudes of those who play. 350,000 of children from all over Portugal benefited from the NPES, and were encouraged by famous local athletes.
The International Paralympic Committee Worldwide Digital Awareness Campaign,  #Wethe15, is the next nominee. #Wethe15 is a worldwide digital awareness campaign that places people with disabilities at the heart of the inclusion agenda. Launched before the Tokyo 2020 Paralympics, #WeThe15 aims to end discrimination against people with disabilities who make up 15% of the global population, by publicly acting for visibility, accessibility and inclusion. #Wethe15 gathered a massive response on social media, with over 2.5 billion interactions.  More than 125 iconic landmarks around the world, such as the Colosseum in Rome and the Empire State Building in New York, were lit up in purple, the campaign’s colour.
Last but not least, the International Cycling Union is up with their ‘Evacuation Procedure of Afghan Refugees’. Following the takeover of Kabul by the Taliban in August 2021, the International Cycling Union (UCI), its President David Lappartient, and other members of the Cycling community have been key players in the evacuation of 165 refugees from Afghanistan. Thanks to this operation, female cyclists, members of the Afghan cycling management, artists, judges, journalists, and human rights campaigners have been able to reach Europe. Thirty-eight of these Afghan evacuees, were welcomed to join the UCI World Cycling Centre (WCC), in Aigle in Switzerland. A great demonstration of solidarity, proving the power of sport to unite people, transform lives and build a better world.
All the Peace and Sport Awards winners 2021 and the next Champion for Peace of the Year will be revealed on the organisations’ social media networks from 7th to 11th December.