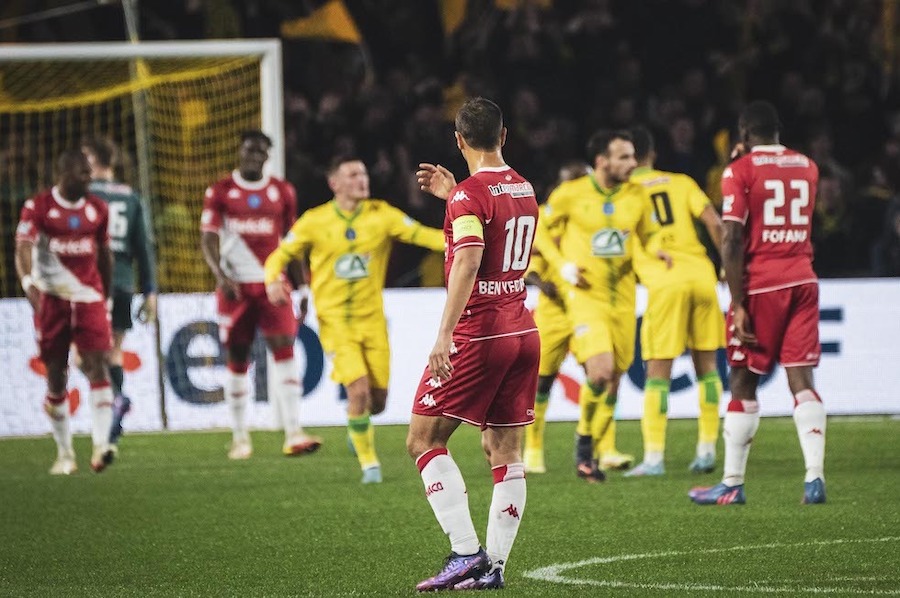 On the brink of reaching a second consecutive Coupe de France final, Monaco came unstuck at the Beaujoire Stadium on Wednesday as Nantes advanced at their expense in cruel fashion (4-2 on penalties).

A semi-final defeat, when a place in the final is within grasping distance is always a tough blow to take, no more so than when the result is decided by penalties. As a disheartened Philippe Clement pointed out post-match, “Penalties are still a bit of a lottery.”

What preceded the ultimately unsuccessful shoot-out “lottery”, was a tight contest over which Clement’s Monaco could, and often did, exert their control. The smoke from the pre-kick-off pyrotechnic display had barely dissipated when Nantes conjured up the first chance of the fixture, the ball barely visible to the naked eye as Djibril Sidibe made a crucial block.

Monaco took the lead soon after, Guillermo Maripan expertly glancing a Vanderson free-kick past Remy Descamps in the Nantes goal, sending the 300 travelling Monaco fans into raptures. The Chilean defender would quickly turn from hero to zero, as his error allowed parity to be restored.

A slack pass from the defender allowed Nantes to break with pace and numbers, and Sidibe, in a desperate attempt to prevent the decisive pass, inadvertently diverted the ball past Alexander Nubel and into his own goal.

Both sides had chances to go ahead before the break, the best chances for Monaco falling to Gelson Martins and Youssouf Fofana, whilst Ludovic Blas almost netted for Nantes on the stroke of half-time.

The electric atmosphere in the stands continued to seep onto the pitch, as the second-half was once again played at a high-tempo. Samuel Moutoussamy looked to have shattered the dreams of the Monaco fans late-on as he bundled home a penalty-box scramble.

Monaco were given a lifeline just seconds later. The returning Myron Boadu, on as a substitute, converted another sumptuous Vanderson delivery to level the scores once more.

Neither side could break the deadlock in the closing stages (2-2), and so OGC Nice’s opponent in the final was to be decided by spot-kicks. Things couldn’t have begun any worse for Monaco, the normally reliable Wissam Ben Yedder missed the opening penalty. Randal Kolo Muani converted for Nantes’ to give the home-side an immediate advantage.

Nubel struggled to get anywhere near any of Nantes’ penalties, and Aurelien Tchouameni’s miss gave Monaco a mountain to climb, with Nantes then needing to miss both of their remaining penalties. Moses Simon made no mistake with the decisive penalty, and the tie settled, the Beaujoire was then engulfed by a mass pitch-invasion amidst jubilant scenes.

Monaco have an important month ahead, with two legs of a Europa League tie against Braga, and a handful of matches against rivals for the European places. That is what hung most heavily on the mind of Clement post-match.

“Luck wasn’t on our side. We are still in two competitions. We are very ambitious, we want to turn our luck around. On Sunday, I want to see players start like they did today (Wednesday).”

Clement often likes to stress that no match is “decisive”, but as Monaco reach a critical juncture in their season, each match now carries heightened importance, beginning with Marseille at the Orange Velodrome on Sunday. 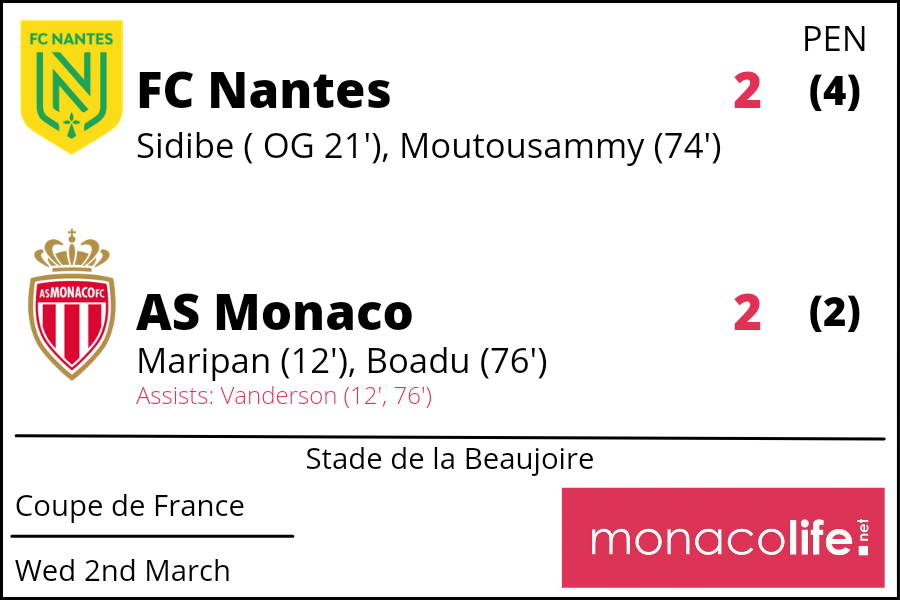