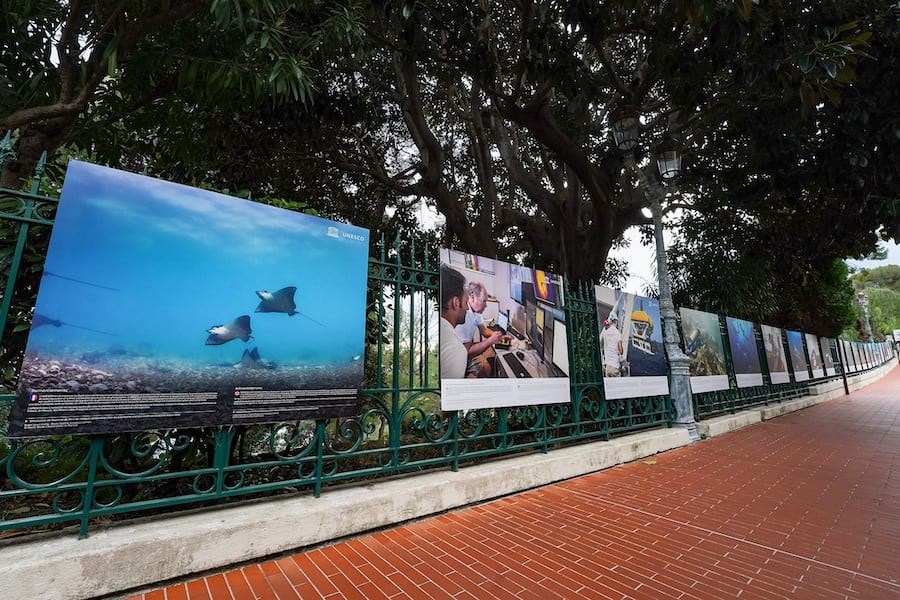 Delve into the world of marine research with a new photographic exhibition on the Rock featuring some of the planet’s most spectacular Heritage Listed marine sites.
After three months on the gates of UNESCO’s headquarters in Paris, the photographic exhibition ‘Protecting UNESCO’s World Marine Heritage through Scientific Research’, made up of 21 photographs from the Monaco Explorations missions, is now to be discovered on the gates of the St-Martin Gardens in Monaco until 11th March as well as in digital version.
Since 2017, the Principality of Monaco has been in partnership with UNESCO to strengthen the conservation and scientific understanding of marine sites inscribed on the World Heritage List. This partnership incorporates a strategic collaboration with the expeditions led by the Explorations de Monaco.
In addition to the results of scientific investigations carried out during the expeditions, this collaboration helps to draw international attention to the conservation challenges facing the most emblematic marine sites in the world.
Among the 50 marine sites listed as World Heritage by UNESCO, spread across 37 countries, four are represented in this exhibition: the Tubbataha Reef Natural Park (Philippines), the Malpelo Fauna and Flora Sanctuary (Colombia), the Rock Islands Southern Lagoon (Palau) and the Lagoons of New Caledonia (France).
The photographs all come from research work carried out by international and multidisciplinary scientific teams during several Monaco Explorations missions, covering megafauna, shark tagging, deep sea exploration, and the adaptation of corals to climate change, among others. Each image reveals a wide variety of habitats as well as marine life that is still largely unknown.
The exhibition is an invitation to learn more about these magnificent sites and the research activities that are essential to monitoring the state of conservation of sites and understanding the species. It forms part of the United Nations Decade of Ocean Science for Sustainable Development 2021-2030, the preparation of which is coordinated by the UNESCO Intergovernmental Oceanographic Commission (IOC).
The launch of this major operation will be marked on 28th January by a gathering of high-level supporters, during which HSH Prince Albert II of Monaco will participate.
Entitled ‘The Science We Need for the Ocean We Want’, this initiative represents a unique opportunity for the world to scale up investments in science and to mobilise the latest scientific advances and innovations to protect our ocean – including marine World Heritage sites – for future generations.