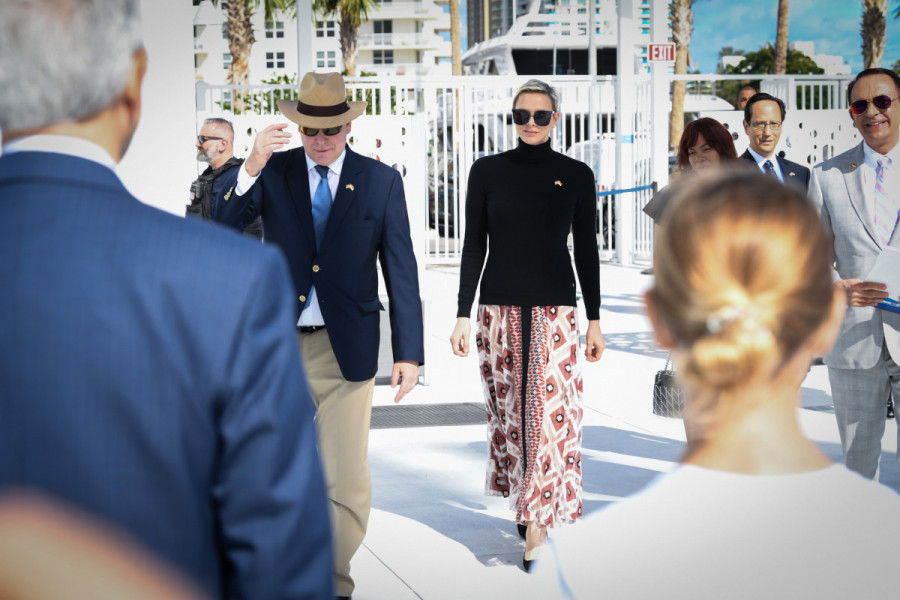 Prince Albert and Princess Charlene visited Fort Lauderdale in Florida ahead of the opening of the city’s newly renovated Aquatic Centre, and announced plans for collaboration in the years to come.

Fort Lauderdale’s famed Aquatic Centre has just completed a multi-million dollar make-over project, and if that weren’t reason enough to celebrate, a pre-opening visit on 29th December by Monaco’s Prince Albert and Princess Charlene certainly would be.

The visit was prompted by Mayor Dean Trantalis’ recent trip to the Principality, where he was involved in meetings designed to bring Fort Lauderdale and Monaco closer. These talks included a possible collaboration between the two port destinations and their famous respective boat shows as well as other investment opportunities.

Prince Albert and Princess Charlene were bestowed a great honour by the American city and were given a key to Fort Lauderdale during their trip. They were also keen visitors to the new aquatics centre, a site that holds interest for both: Princess Charlene as a former Olympic swimmer and Prince Albert as an International Swimming Hall of Fame (ISHOF) honouree. Incidentally, his uncle Jack Kelly, the late Princess Grace’s brother, was the president of the ISHOF in the 1980s.

The new Aquatic Centre has one of the tallest diving towers in the world in addition to top-notch competition pools. It is hoped that the renovations will help revitalise the Floridian city as a destination for competitive events.

Mayor Trantalis, who is currently working to establish Monaco as a twin city to Fort Lauderdale, said, “The renovation of the aquatic complex restores Fort Lauderdale as a premier destination for global competitive swimming and diving at a venue that is also available to the public. The visit by their Serene Highnesses of Monaco shows the global value we have achieved and the excitement that we are generating.”

The couple were treated to a demonstration of the high dive platform by diver Braden Rumpit as well as with competitions by Olympians, a Paralympian and student athletes.

“We hope these ties will continue even beyond the celebration here today,” said Prince Albert at the event. “We have wonderful plans of maybe getting one of [the] major events both in Monaco and here in Fort Lauderdale – the Boat Show and the Monaco Yacht show – to collaborate in a much more fruitful way. We really look forward to all these opportunities.”