Prince Albert has unveiled a hybrid version of the Sunbeam Alpine driven by Grace Kelly in ‘To Catch a Thief’, a retrofit undertaken right here in the Principality.
The 1954 Hybrid Sunbeam Alpine Mark III was the star of Ever Monaco on Friday 11th September, as Prince Albert and actress Brigitte Auber uncovered the stunning retrofit hybrid car.
As a light rain fell during the ceremony, the Prince held the arm of the 95-year-old actress and protected her with his umbrella. Brigitte Auber played Daniella in the Hitchcock classic, a teenager with a crush on Cary Grant’s character John “The Cat” Robie.

The Smart Electric Monaco Association has equipped the sapphire blue convertible with two 15 hp electric motors, which complement the original petrol engine.
The conversion was carried out in the garage of the The Cars Collection of H.S.H. the Prince of Monaco and forms part of the museum exhibition.
With Cary Grant by her side, Grace Kelly fled French police in the Sunbeam Alpine during a daring car chase along the Moyenne Corniche in the 1955 cult film. 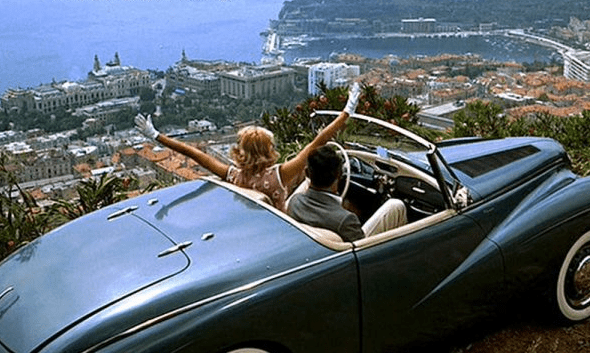 While not the exact car that was driven by Grace Kelly, this retrofit is the first one involving an historic vehicle connected to Monaco.
After Friday’s unveiling, the Grimaldi Forum hosted a screening of the film To Catch a Thief, which is this year celebrating its 65th anniversary year.

Photo gallery: click on the photos below to enlarge…