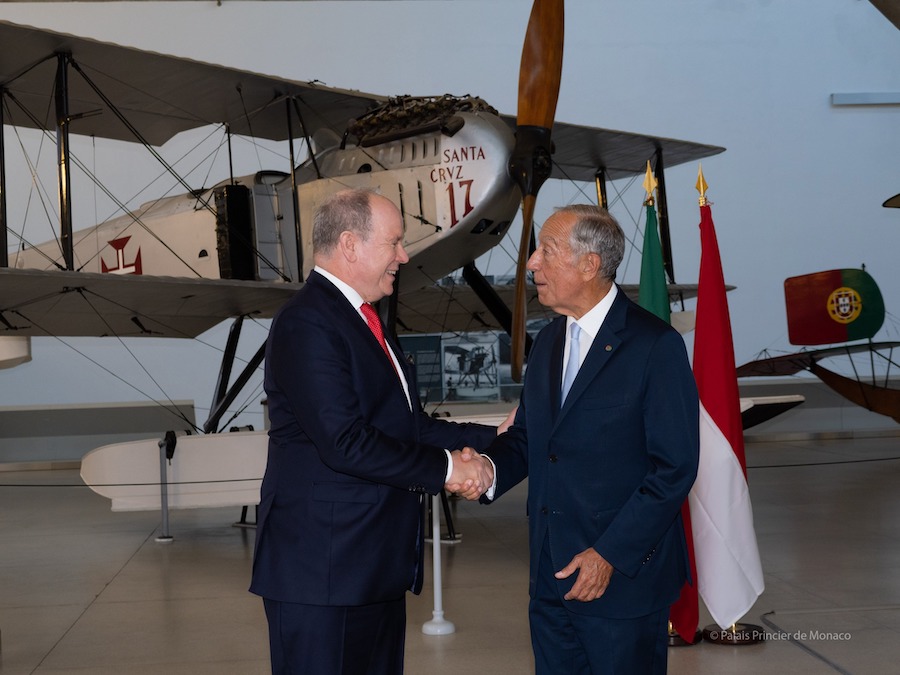 Centenary commemorations of the death of Prince Albert I have taken Monaco’s Sovereign on a trip to Portugal and Spain. Here are the highlights.

The tour kicked off on Thursday 13th October when Prince Albert II travelled to the Azores for the first leg of the four-day official visit.

The Azores archipelago was of major importance in the scholarly career of Prince Albert I. It was here, between 1885 and 1914, that he carried out half of his 28 scientific campaigns.

Prince Albert II of Monaco was welcomed by the President of the Regional Government of the Azores, Dr José Manuel Bolieiro, and by Henrique de Polignac Mascarenhas de Barros, Ambassador of Monaco to Portugal, upon his arrival in Ponta Delgada, the capital of the Azores located on the São Miguel Island.

After a journey through the city via avenue Prince Albert Ier, inaugurated in 1904, the Monegasque Sovereign laid a wreath of flowers at the foot of the bust of his great-grandfather on the main quay of Ponta Delgada.

Prince Albert II was then received at the town hall where he inaugurated an exhibition at the Carlos Machado Museum that is dedicated to the friendship and collaboration of his great-grandfather with scientist and photographer Francisco Afonso Chaves (1857- 1926), who helped the Prince in providing the Azores with a modern meteorological service, known as Horta observatory. The day ended with an official dinner at the Palace of Sant’Anna.

“This exhibition presents a wide variety of objects and works, scientific instruments, paintings, original archives and unpublished photographs, from both Monegasque and Portuguese, public and private collections,” said the curators of the exhibition, Michaël Bloche, Director of the Prefiguration Mission of the National Archives of Monaco, Thomas Fouilleron, Director of the Archives and Library of the Palace of Monaco, Stéphane Lamotte, Secretary of the ‘Albert I – 2022’ Committee, and Vincent Vatrican, Director of the Institute Audiovisual of Monaco.

In the evening, the Sovereign of Monaco was received at Belem Palace where he was decorated by the Portuguese President of the Grand Cross with a necklace from the Order of the Children Dom Henrique.

During the third stage of his memorial visit to Portugal and Spain, Prince Albert II was welcomed in Madrid on Saturday 15th October by the Higher Council for Scientific Research. There, the Prince witnessed a presentation on Spanish oceanography at the time of Prince Albert I and attended the screening of a film, in progress, on the scientist Odón de Buen, Spanish correspondent and friend of his great-grandfather. A commemorative plaque, intended for the Spanish Institute of Oceanography, was also unveiled. The ceremony served as a reminder of the close link established by Prince Albert I with Spain, from his formative years in the Royal Spanish Navy between 1866 and 1868, to the creation of the Scientific Commission for the Exploration of the Mediterranean in 1919.

During the final stage of this trip, Prince Albert II travelled to Puente Viesgo on Sunday 16th October, at the invitation of Miguel Ángel Revilla, President of the Autonomous Community of Cantabria, to visit the cave of El Castillo, listed as a UNESCO World Heritage Site, as well as the future museum. A commemorative plaque was unveiled.

Click on the gallery below to see more photos of Prince Albert II’s visit to Spain and Portugal. Photos by Gaetan Luci, Prince’s Palace…