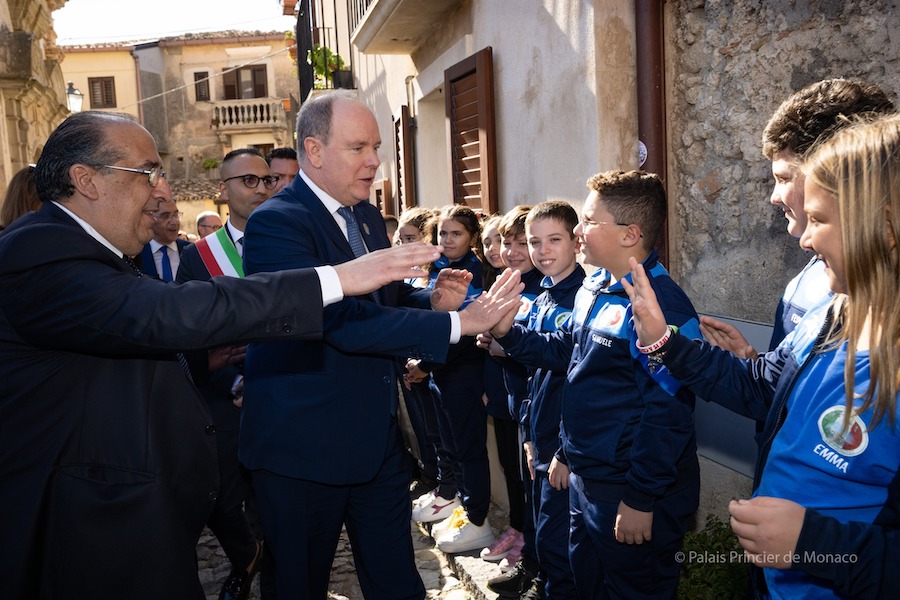 Prince Albert II continued his trip to Calabria on Tuesday with visits to many different sites bearing the Grimaldi name.

The Prince was welcomed to the town by Deputy Mayor Rudi Lizzi, where he unveiled a sign showing the town’s membership to the Grimaldi Historic Sites of Monaco network. He then went to the Town Hall where he met with elected officials before presiding over the laying of a plaque commemorating his visit.

Prince Albert continued his journey on foot to the Greco-Byzantine crypt of Gerace Cathedral and then the diocesan museum. He also received honorary citizenship at the Chiesa di San Francisco in Assisi.

In Canolo Nuova, a small town of 700 inhabitants, the Prince, Mayor Francesco Larosa, and President of the Aspromonte National Park Leo Autelitano took part in a traditional lunch prepared by the shepherds of the park. Guests enjoyed regional specialities and listened to the sounds of the zampogna, antique bagpipes that are still widely used in Italy.

The afternoon was spent visiting Cittanova, a town in the province of Reggio Calabria. There, the Prince unveiled a plaque at the entrance of the village marking it as a Grimaldi Historic Site of Monaco. Another plaque, this time at City Hall, was unveiled in commemoration of his visit. The procession then took to the streets and alleys to meet the large population who had turned out for Prince Albert’s visit, before he was invited to discover the Chiesa Madre di Cittanova, built in 1785 at the request of Maria Antonia Grimaldi Serra, daughter of the Princess of Gerace Maria Teresa Grimaldi, who died in the earthquake of 1783.

After paying his respects at the tomb of Princess Maria Teresa Grimaldi, the Prince continued his journey on foot to the former Grimaldi Palace via Strada Grimaldi. He then visited the Villa Comunale Carlo Ruggiero park before joining the Teatro Rocco Gentile where he received honorary citizenship of the municipality.

The municipalities of Gerace, Cittanova and Molochio were part of the ancient Principality of Gerace, which, between the 16th and 18th centuries, belonged to the Grimaldis of Genoa from a collateral branch of the Monegasque branch.

The day ended with a dinner offered by the Prince to the mayors of Gerace, Cittanova and Molochio as well as to the regional and local authorities in order to thank them for the extremely warm and friendly welcome reserved for him at each stage.