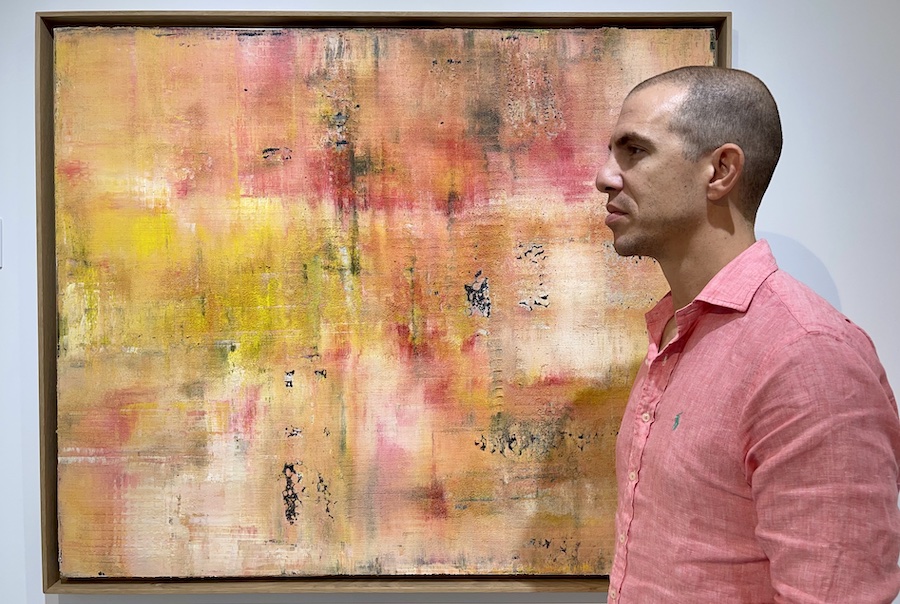 Sassan Behnam-Bakhtiar is so many things. He is an artist, a seer, a visionary, a disruptor, a father, a survivor. All of this is displayed on his canvases… the layers, the textures, the energy, the call for his audience to look within themselves and find a truer meaning to reality, to evolve.

For the month of September, Behnam-Bakhtiar’s exhibition ‘Journey Within’ will be on display at Sotheby’s new Monaco gallery. It is a unique exhibition for the multidisciplinary artist, who is very selective about the galleries he works with. But he says he has enjoyed working with Louise Grether, head of Sotheby’s Monaco office, and Mark Armstrong, senior director.

It is an exhibition with which the Franco-Iranian artist continues to question modern value systems and calls for introspection, for a more spiritual, human-centred approach to living.

The crisscross finish, and scraped and layered textures have become his signature style of painting. His creative process is impromptu, he tells me during a recent private showing; nothing is planned beforehand, and he mixes his paints on the canvas as he goes. It means that no single piece can ever be recreated; they are as unique as he is.

“My work really focuses on layering and delayering, and time plays a very important role,” he says. “The paints dry to a certain degree, and there is literally a little window when I can successfully scrape off the paint in a way in order to get the texture that you can see.”

“Once you look within, once you start removing the unnecessary layers of your humanity, you get to a point where you really start feeling your source frequency; you understand the universal language, what is going on. Right now, we don’t see it with our physical eyes, but there is such an exchange of energy between all of us. We are made of energy at the end of the day, so if we can really understand how our humanities are made, we will be able to live a life that we are destined to.”

‘London’, for example, radiates a dark energy. Behnam-Bakhtiar admits it was a difficult moment in his life, and his painting of the London landscape reflects that. The others are vibrant and bold, mirroring the colours of the Mediterranean. These were painted at his studio in Saint-Jean-Cap-Ferrat where he has lived with his wife and son for a number of years.

“When it comes to my abstract works, I want that they evoke an emotion that triggers something in your being, something that clicks in the psyche and makes you want to understand more,” he says. “As an artist, the biggest satisfaction I can have is that someone comes in front of my work, has a little click, and leaves with that click and then it alters their way of life. Everyone has a different experience when they come in front of the painting, and I’m always in the corner, watching how people react.”

It hasn’t always been about abstract art for Behnam-Bakhtiar. He started out doing portraiture and has worked with film, installations, and sculptures. “I flirt between abstraction and figuration”, reveals the artist. In 2018, he exhibited sculptures in Villa Santo Sospir before it was closed for renovation, the hallowed grounds of Jean Cocteau’s Cap Ferrat hideaway and  the home that he “tattooed” with his unique frescoes in tempera. Along with the sculptures created in his signature scraped-paint style, Behnam-Bakhtiar also edited audio clips of himself talking with Cocteau about how humanity needs to be more connected to the universe.

The beauty and light of the French Riviera has long been an attraction for artists, but Behnam-Bakhtiar doesn’t like to be compared to the greats. “All I can say is that I get it why they came here. It’s not a question of following in anybody’s footsteps, but this place truly has an impact. That’s the reason why I moved from London to Cap Ferrat, it’s the light.”

His inspiration, he reveals, comes from life experiences.

Born in Paris in 1984, Sassan Behnam-Bakhtiar is a fourth generation artist and has been painting since the age of four. As a teenager and young adult, he lived in Tehran, Iran. Through his mother, he traces his decent from Iran’s ancient Bakhtiaru tribe. Through his father, he is a descendant of the Qajar monarch Ahmad Shah.

“Ours was a highly prominent family in Iran before the revolution. This current regime doesn’t like people like us because they are paranoid and they see us as a threat. So, I went through a lot of traumatic experiences in my life. Placed in those situations, it pushed me to really look within.”

He points to the largest painting in the room. It is titled ‘Twin Trees of Life’. “I paint trees in abstract form to remind people that no matter where you are, no matter what happens to you on any day, you always have the power to change your life, but you really need to want it, to visualise it. And at some point, you are able to open your third eye.”

Sassan Behnam-Bakhtiar is clearly very spiritual, but he is also an industrialist. In June 2021, at the iconic Grand-Hotel du Cap-Ferrat, Sassan Behnam-Bakhtiar, British digital artist Vector Meldrew, and British singer, composer and entrepreneur Tinie Tempah collaborated in what was the world’s first dedicated NFT residency to create a suite of NFT art works, curated by Kamiar Maleki.

The residency culminated in a unique, collaborative performance of live painting by Sassan Behnam-Bakhtiar and a musical and spoken word performance by Tinie Tempah. “We wanted to merge the contemporary art world, music and digital,” The four NFTs, under the banner Present the Future, dropped on 21st July 2021 and were auctioned by Bonhams. They sold instantly.

“The NFT world is interesting because it does give power to the creatives,” says the artist. “I’m involved in the crypto world as well, so I know what’s going on, but as an artist I had an old school mentality, even though I’m from a younger generation. I will always stick to real, tangible works, but NFTs create opportunities for young creatives, and I respect that. They can get royalties; they have more power.”

Sassan Behnam-Bakhtiar is known in the art world as a disruptor, a “rebel artist” as some international media have called him. And the 38-year-old says he no longer repels the label.

Journey Within is featuring at Sotheby’s Monaco Gallery until 26th September.

Photo above of Sassan Behham-Bakhtiar by Cassandra Tanti, Monaco Life