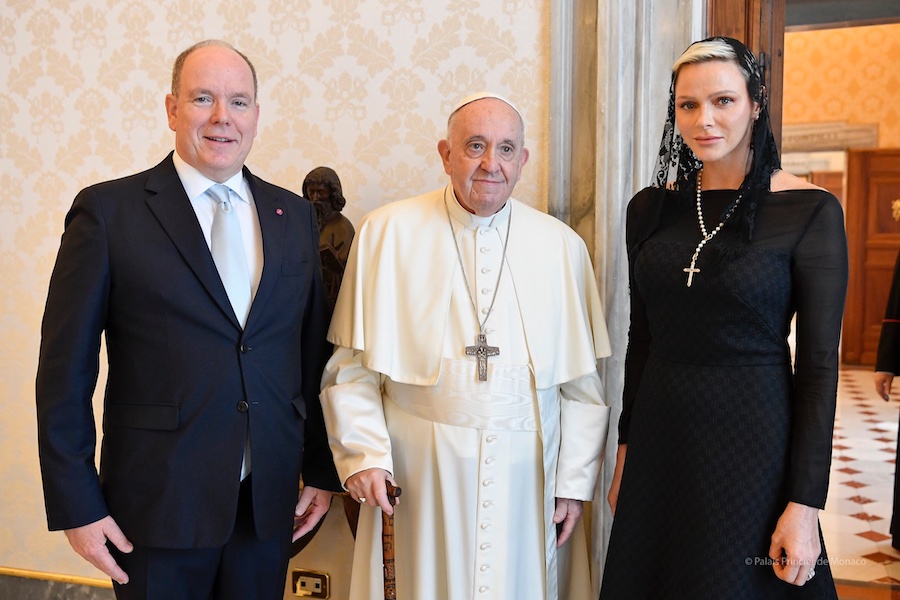 Ecological and humanitarian issues were top of the agenda when Prince Albert and Princess Charlene met with Pope Francis at the Vatican’s Apostolic Palace on Wednesday.

According to Matteo Bruni, director of the Vatican Press Office, the pontiff said he was “impressed to meet a person who is committed and dedicates time to good works” after their meeting.

It was the second time that the princely couple met the Argentinean pope after a first visit in 2016. Prince Albert had met his predecessor, Benedict XVI, in 2009 and 2013.

The meeting between Pope Francis and the couple lasted about 25 minutes. During the traditional sharing of gifts, the Pope presented them with a bronze depiction of a child helping another child up from the ground with the words “love” and “help” etched on either side of the figures, as well as several documents including copies of his Message for the 2022 World Day of Peace and the Document on Human Fraternity.

Meanwhile, Prince Albert presented the Pope with an artistic sketch of the Chapel of St. John the Baptist located in the Palace of Monaco.

Monaco’s Vatican diplomacy is etched in ecological issues, given Prince Albert’s commitment to and defence of the oceans, as well as humanitarian issues, especially for children. Monaco regularly works with important Catholic organisations such as the Sant’Egidio Community and the Order of Malta.

After the audience with the Pope, Prince Albert and Princess Charlene visited the Folon exhibition at the Vatican Museums, which is open to the public until 27th August.

The Monegasque princely family have regularly visited Vatican City throughout the decades. Prince Rainier III and Princess Grace were received by Pope Pius XII in 1957, John XXIII in 1959, and Paul VI in 1974. In 2005, Prince Albert’s first public appearance as sovereign outside Monaco was his attendance at the funeral of Pope John Paul II.