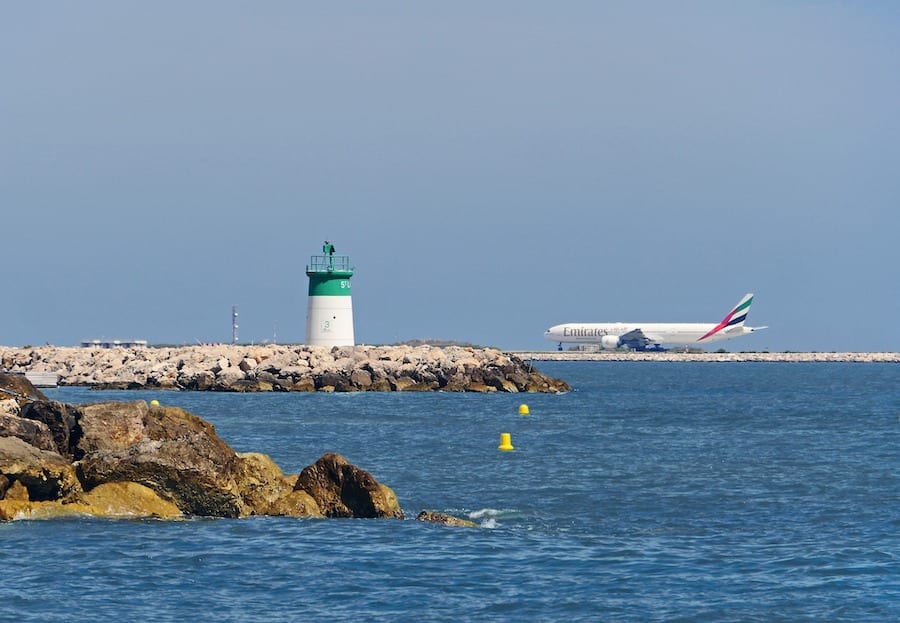 Nice airport’s commercial aviation traffic fell an astounding 68.4% in 2020. Though alarming, the slow year did allow airport authorities to rebuild and renovate, getting a jump on creating “the airport of tomorrow”.
A report issued by Nice Côte d’Azur on Thursday revealed that the airport saw a massive drop in both air traffic and passengers in 2020, with only 4.58 million people travelling commercially through the third busiest airport in France, equating to a 68.4% decline. In addition, there was also a 37.1% drop in general aviation practices for the year.
“This drop in activity is significant, but nevertheless should be put into perspective because it is less marked than most of the of other major airports – national or European,” said Franck Goldnadel, Chairman of the Executive Board of the Airports of the Côte d’Azur. “This demonstrates the resilience and relevance of our model which favours direct connections, still mainly European and therefore less sensitive to border closures between continents which strongly impact long-haul traffic. But we remain confident for the recovery as the underlying assets of our territory, which remains particularly attractive, are powerful.”
In 2019, 14.485 million passengers went through Nice Côte d’Azur airport. In 2020, the Covid pandemic kept people at home in record numbers through border closures, fear of catching or spreading the virus, and general travel restrictions which prohibited casual travel much of the year and continues to do so into 2021.
But when life gives lemons, make lemonade. Nice Airport authorities used this time to carry out projects both on infrastructure and in the community.
Since early January, the airport has started works on renovating its North runway, which is normally dedicated to landings. The project was designed to lessen environmental impact and modernise the facility.
In order to make the project as eco-friendly as possible, the airport will be recycling 20% of the current asphalt as well as positioning a concrete plant nearby to reduce the number of construction vehicles required as well as lessening noise.
“The maximum reuse of the spoil and the construction of this temporary concrete plant are for us two important levers aimed at reducing the noise and atmospheric pollution of this site, which is part of a necessary and regular renovation policy of our infrastructures.” explained Mr Goldnadel.
The project is set to last for roughly one month and will employ 200 people.
Additionally, Aéroports de la Côte d’Azur, the owners of Nice Airport, have dedicated funds to reforest 2.6 hectares in the town of Carros which were destroyed by fire in 2017. In the first phase, 2,080 plants, including holm oak, downy oak, and various rowan trees, will be planted.
Additionally, 500 cedar plants will be planted near Cannes-Mandelieu Airport in the village of Saint-Cesaire-sur-Siagne. The total funding offered comes to €70,000, with an increase in 2021 to €100,000.
“The preservation of our territory has been our top priority for many years,” said Mr Goldnadel. “This is how we were the first airport in France to achieve carbon neutrality, in 2016. Today, we are continuing our efforts, despite the situation linked to the pandemic, and we are committing to a multi-year forest reforestation program in the municipalities of our territory. These first trees planted this winter will be followed by many others over the next few years.”
According to the airport group’s forecast, they will participate in the reforestation efforts of over 80% of the communal forests in the Alpes-Maritimes over the next 10 years. The trees planted will help eliminate 300 tonnes of carbon from the air.