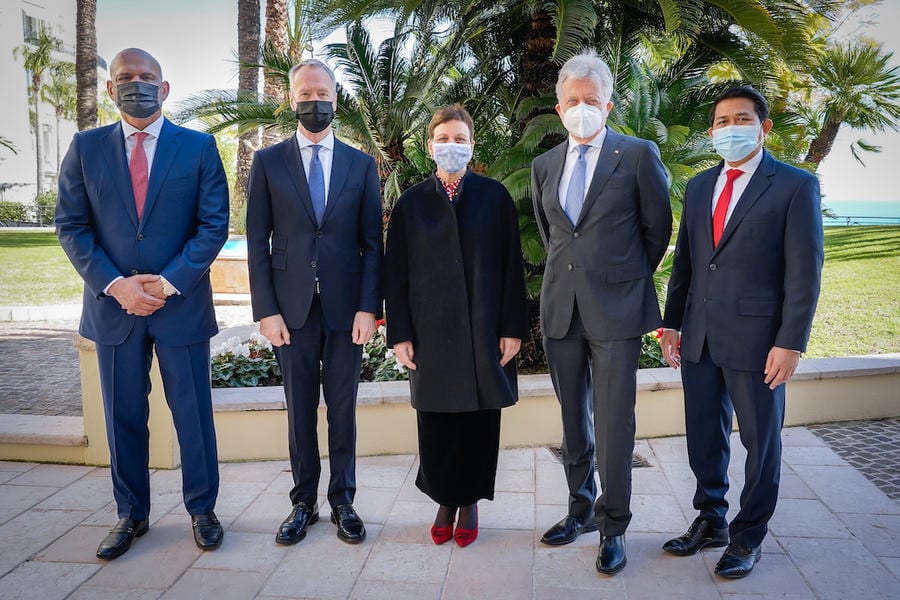 The Principality has officially received new ambassadors from Germany, Sweden, Cambodia and the United Arab Emirates.

Director General of the Department of External Relations and Cooperation Isabelle Rosabrunetto met Monaco’s newest ambassdors at a lunch reception held at the Hermitage Hotel on Thursday 11th February.

Ambassadors of the Kingdom of Cambodia Sophann Ket, Ambassador of the State of the United Arab Emirates Ali Abdulla Alahmed, Ambassador of the Federal Republic of Germany Hans-Dieter Lucas, and Ambassador of Sweden Hakan Akesson met prior to the lunch with Prince Albert II where they presented their Letters of Credence.

Sophann Ket began his career at the Department of International Affairs in Cambodia in 2000. He was appointed Assistant to the Prime Minister in 2004 and then in 2009 joined the Permanent Delegation as representative of Cambodia to UNESCO in Paris, as Minister Plenipotentiary. Promoted to Ambassador and Permanent Delegate in 2014, he took up the post of Under-Secretary of State in charge of European Affairs for UNESCO in 2018.

Ali Abdulla Alahmed was a telecommunications and media executive and worked as Head of Planning and Strategy at Emirates Telecommunications Corporation. He then went on to become Director of Abu Dhabi TV before starting his diplomatic career as Director of Business European Union at the Ministry of Foreign Affairs and International Cooperation of the United Arab Emirates. In 2020, he was appointed Ambassador, Permanent Delegate of the United Arab Emirates for UNESCO.

A career diplomat, Hans-Dieter Lucas joined the Federal Ministry of Foreign Affairs of Germany in 1985 where he held various positions including those of Deputy Director General for Eastern Europe, the Caucasus and Central Asia. He was also named Political Director. As Ambassador, he represented his country on the European Union Political and Security Committee in Brussels as well as for NATO.

Joining the Ministry of Foreign Affiairs for Sweden in 1996, Hakan Akesson held various positions including those of Deputy Director General, Ambassador, Head of Management and Methods in Development Cooperation, Head of Disarmament and Non-proliferation and Director General of Administration. During his Ambassadorial career, he has represented his country as Swedish Ambassador to Ethiopia, Sudan, Djibouti and Turkey.