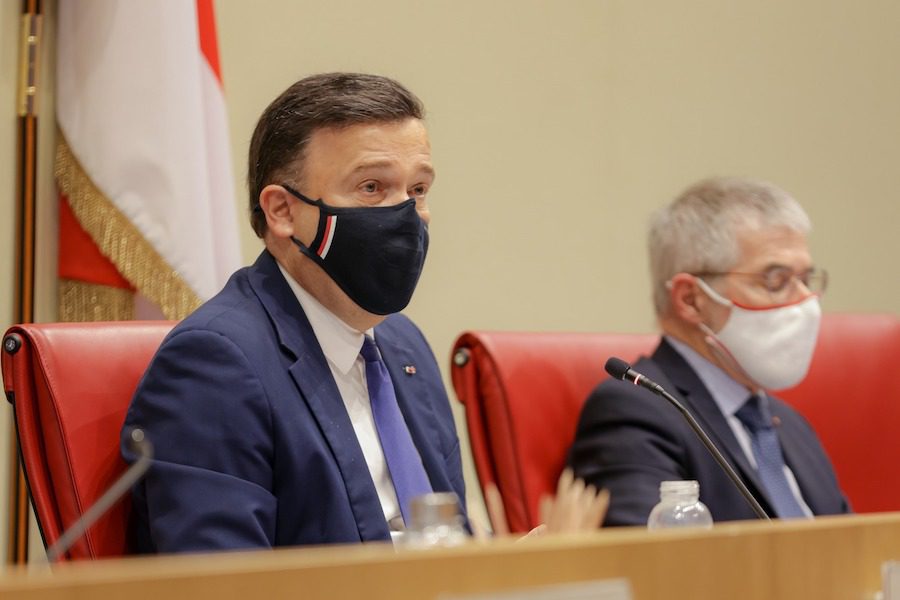 The National Council met to discuss the 2022 Primitive Budget on Tuesday and, along with monetary matters, it was a time for council members to review plans for the future.

To start, the budget itself was discussed, notably the €2.8 million surplus which was regarded as “a strong signal of the resilience of the Monegasque model”, according to council member and President of the Finance and National Economy Commission, Balthazar Seydoux.

VAT was cited as the main source of revenue for the state, 53.4% to be exact, with 88.3% being internal VAT. There is an anticipated increase by 10.4% compared to the 2021 amending budget, though Seydoux believes the government estimates to be on the cautious side.

Minister of State Pierre Dartout stepped in to remind the Council that the health situation is anything but stable and that caution is better than the need to revise the forecast downward. The government, he said, prefers to hold a “reasonable rather than too cautious” assessment.

The meeting moved onto accommodation from here. Regarding expenditure, it is estimated at €1,886 billion, an increase of 19.2% compared to the initial 2021 projection, including €378 million for public interventions and €866 million for equipment and investment, or nearly 46% of the total.

In his report, Seydoux reminded the Council that over 600 housing units will be move-in ready between the end of 2022 and the end of 2023. This number does not cover the shortages in housing in the Principality, though and the next large-scale project, the Bel Air, will not be ready until 2027.

In order to fill in the gaps, intermediary housing options are necessary. Councilman Seydoux mentioned the need to build a state-sanctioned buildings with 60 housing units in Monte-Carlo where an EHPAD is planned, the so-called Les Lierres-Nathalie operation with more than 40 housing units in the Annonciade and suggested adding to the Palais Honoria operation to deliver 30 additional homes.

Minister Dartout made assurances that plans for more units were underway, though was unable at the meeting to give concrete dates.

Balthazar Seydoux also addressed the construction of major infrastructure schemes, including the renovation and extension of the Princess Grace Hospital, whose budget is currently sitting at €965 million, Pasteur Island with new college, the Salle Léo Ferré  and the media library with three-year budgets of €507 million, the car park at the entrance to the city above the Exotic Garden with a three-year budget of €234 million, the Larvotto seaside complex with a three-year budget now at €129 million and the Charles III block, the sole base of which implies a three-year investment of €670 million to which must be added the future waste recovery plant itself for three-years at €377 million, making for a grand total of €1.47 billion.

This led to the discussion of the waste treatment plan originally proposed on 22nd November. Councilman Seydoux believes it to be a solid and achievable project, saying that, “It meets many of our assembly’s expectations in terms of a 2- to 10-fold reduction in polluting emissions, a sharp reduction in greenhouse gas emissions, compatible with Monaco’s commitments and better energy recovery from waste.”

Dartout was happy for the warm reception to the idea, which is being called Symbiosis. “Symbiosis, the investment cost of which is indeed very high, will form part of one of the most complex public operations that the Principality has had to carry out. It will be a question of giving a new face to this entrance to the city and placing the network of roads underground,” said the Minister of State, specifying that the residual plastics will be extracted from the household refuse.

The maritime operations of Monaco were also discussed, including the Cala del Forte port in Ventimiglia, the 40-year concession for the port of Cività Vecchia in Rome, the acquisition of a stake in Informa Marine Inc, promoter of the Monaco Yacht Show and the partnership with P&O Marina Dubai. Also brought up were the expiration of the Cap d’Ail concession in 2027 and the projected Nice-Cap d’Ail shuttle.

Balthazar Seydoux then went on to speak of the “national Monegasque public television service channel to be called Monte-Carlo Riviera” indicating that under Article 14 of the Constitution, international treaties or agreements whose execution has the effect of to create a new budgetary burden can only be ratified by virtue of a law.

The Government and National Council have a different interpretation of the text, in this case the elected officials consider that a specific budget article should be dedicated to the financing of the channel within the framework of the agreement with TV5 Monde.

Finally, civil servant pay rises were discussed, along with the assurance that the proposed free bus test will take place in due course.

Business & Finance Cassandra Tanti - September 25, 2020
Minister of State Pierre Dartout has toured the main construction sites of the Principality, taking stock of the major developments that are currently under way.

The Chamber of Commerce’s Monaco Economic Board (MEB) met last week with almost 100 institutional and private company directors in the Italian city with the goal of building stronger ties to the Campania region.

Three events were held over two days, from 21st to 23rd October, and were attended by representatives from the MEB as well as delegates from Richelieu Bank, Mazza Immobilier and Engineering and Energy.

Think tank Trinità dei Monti hosted a business meeting for 80 on Monday. Tuesday morning there was an assembly with the Naples Chamber of Commerce, where letters of intent were signed announcing new mutual economic cooperation between the two parties. That evening, an event with members of the Neapolitan Club of Ambassadors, a club of economic and institutional players with links to Monaco, met at the Circolo Nazionale dell’Unione.

As a close neighbour, Italy is an important ally with regard to trade and business development and these meetings have solidified the already good relations between the two regions.

The Monaco Economic Board will return to Italy from 8th to 10th November, meeting with business leaders and officials in Turin.