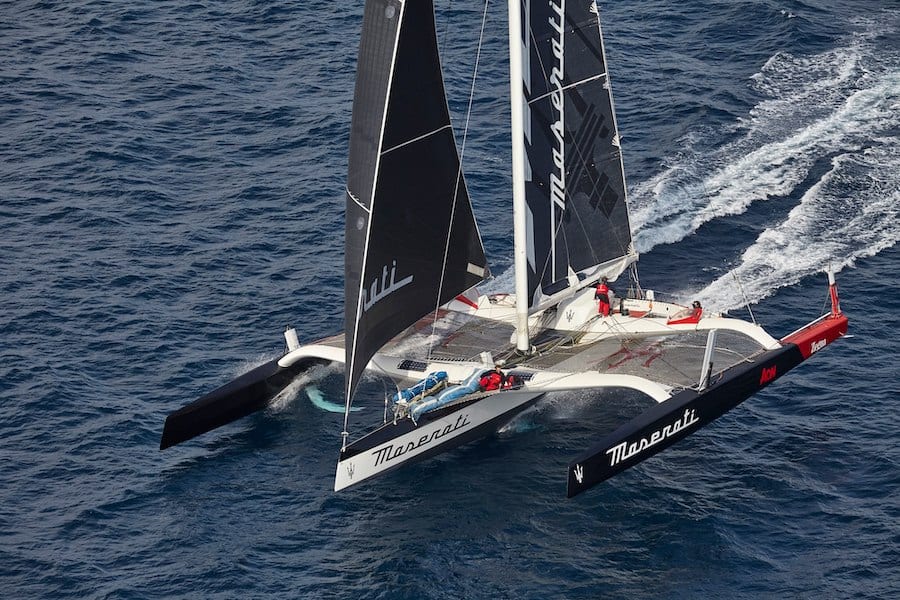 A new record was set on the weekend when the Multi 70 Maserati skippered by Giovanni Soldini with five crew including Pierre Casiraghi made the trip from Monaco to Saint Tropez in two hours, 25 minutes and 44 seconds.
The Multi 70 Maserati sailing boat with Giovanni Soldini and five crew on board beat the old record by Norwegian Knut Frostad in 1999 who made the trip in three hours, four minutes and 30 seconds.
The record is part of a series of tests and trials in the Mediterranean since the Maserati left the yard on Friday 5th March from La Spezia. “After four months of work, we made so many improvements and innovations and are now beginning a series of tests and adjustments,” said a delighted Soldini.
Meanwhile, the 7th Primo Cup-Trophée Credit Suisse took place in the Principality on the weekend. This year’s race was modified due to the health crisis and included only Yacht Club of Monaco members, but the excitement was no less than usual.
Over three days, J/70 and Smeralda class boats fought hard to hit the top spots. The J/70 races attracted 20 boats and the winner of the class at the end was G-Spot captained by Giangiacome Serena di Lapigio who beat out Ludovico Fassitelli’s Junda-Sumus-Capital team by two points. The Sailing Racing Team and Loic Pompée made a strong third place showing.
“This year is very different, but it was important for us to maintain the link with members and keep some of our activities going, particularly as we prepare to host the J/70 World Championship next year,” said Yacht Club of Monaco General Secretary Bernard d’Alessandri. “I also think it’s important for our young people to have an activity and maintain social ties. That is really essential for a club.”
In the Smeralda class, nine boats competed, and class President Charles de Bourbon des Deux-Sicilies won on the Vamos mi Amor by a nose against the Beda, helmed by Timofey Sukhotin. Francesco Vauban on the Botta Dritta rounded out the podium.
The races ended the Monaco Sportsboat Winter Series Season, and the final rankings were given although they excluded the wins over the weekend in the interest of fairness to the international teams who were unable to compete.
In the end it was Claudia Rossi in the top spot with the Petite Terrible-Adria Ferries. Giangiacome Serena di Lapigio on the G-Spot clinched the number two spot and third place went to Ludovico Fassitelli on theJunda-Banca del Sempione.