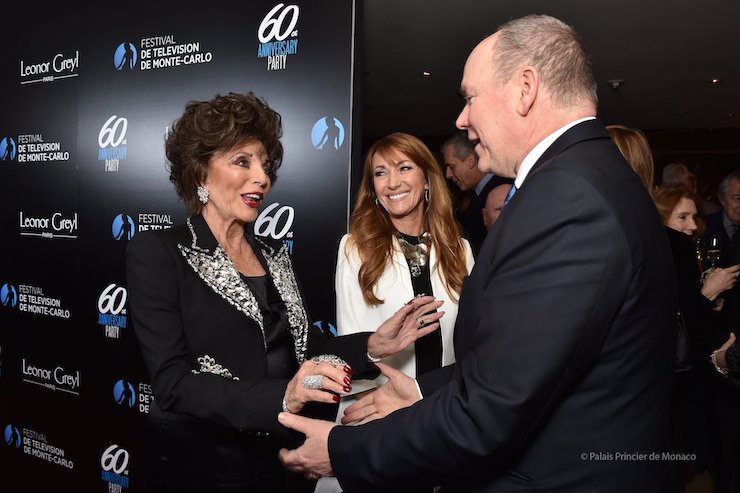 An incredible line-up of celebrities joined Prince Albert in celebrating the 60th anniversary of the Monte-Carlo Television Festival in Los Angeles on Wednesday night.
A star-studded reception was held at the historic Sunset Tower Hotel in Los Angeles, the first of many events to mark the 60th edition of the Monte-Carlo Television Festival, which is set to take place from 19th to 23rd June 2020.
Among the A-list guests on Wednesday were Joan Collins, Linda Gray, Sophia Hutchins, Caitlyn Jenner, Denise Richards, Priscilla Presley, Jason Priestly and Billy Zane.


As the Honorary President of the television festival, H.S.H. Prince Albert II of Monaco was a key member of the celebration.“The choice of Los Angeles was natural to host this evening celebration as it represents the heart of an industry that shines around the world,” said Prince Albert. “Created in 1961 by my father, Prince Rainier III, the Monte-Carlo Television Festival celebrates excellence in international television production. Our American friends have always been faithful and present in Monaco and I am sure we will have the pleasure of welcoming them in large numbers in June.”

The venue for the event – the Sunset Tower Hotel, with its illustrious history as a landmark for Los Angeles nightlife and elegant Art Deco styling – is situated in the very heart of Sunset Boulevard, and has always served as an iconic meeting point for Hollywood’s greatest stars.
250 prestigious guests, actors, actresses, directors, producers, as well as former jury presidents, winners of the Honorary Golden Nymphs and Crystal Nymphs joined His Serene Highness for an evening of glamour and style in the very best of Hollywood traditions.