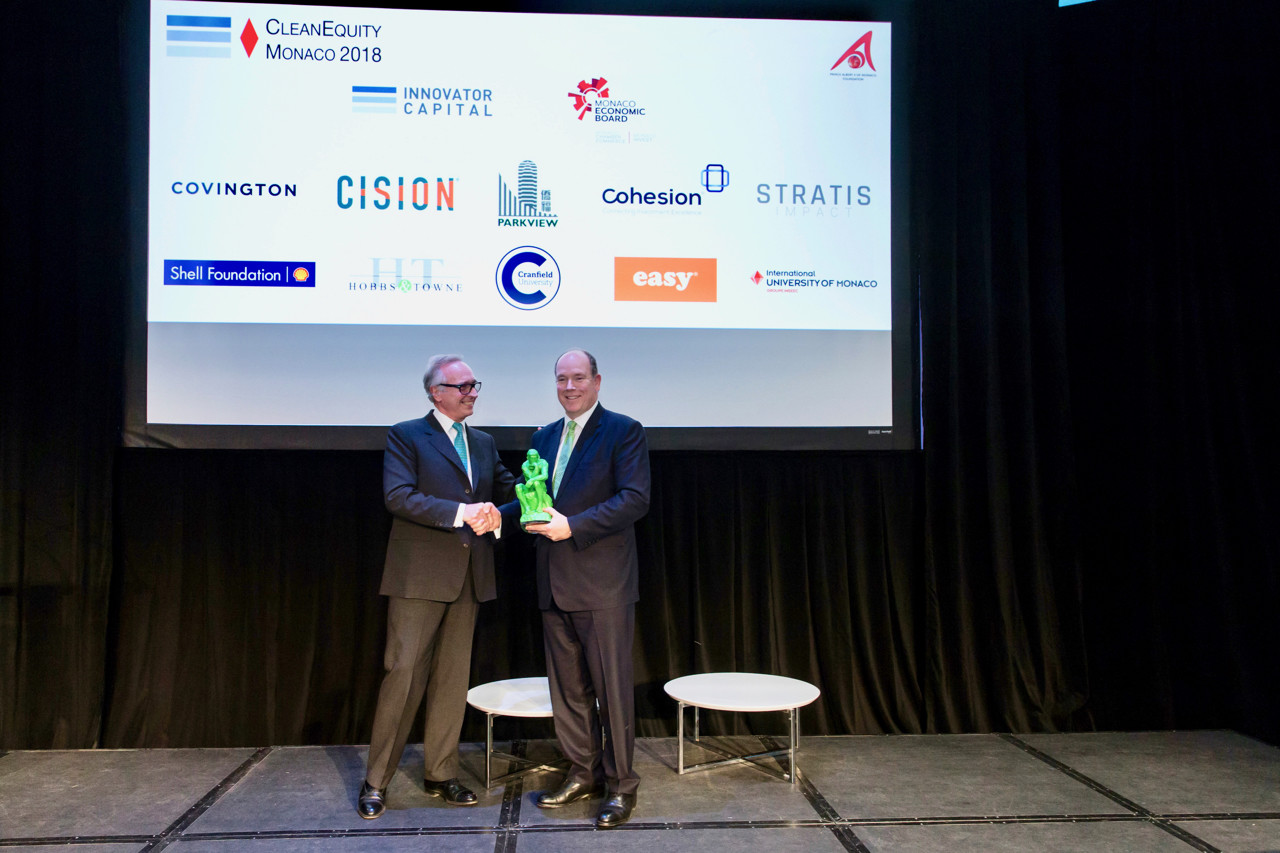 Prince Albert revealed the new Award for Sustainability with the Nobel Sustainability Trust and a Global Green Investment Bank, at the CleanEquity Monaco conference last Friday at the Fairmont Monte Carlo.

Referring to CleanEquity Monaco, which he co-founded with Mungo Park, Chairman of Innovator Capital, in 2007, the Sovereign Prince said he was proud that “the conference has become an important part of the sustainability landscape. Over the years, some 300 companies have presented their plans to over 1600 attendees.

“These companies have gone on to raise nearly $2 billion, friendships have been forged, and greater strides have been made towards a cleaner, safer and more sustainable future.”

The Prince then announced “a new initiative that has origins in the multidisciplinary nature of CleanEquity Monaco, the creation of a new Global Award for Sustainability and a Global Green Investment Bank.”

As HSH stated, the Nobel Prizes continue to be recognised as some of the world’s greatest accolades. “Sustainability was a key concept for the three Nobel brothers Alfred, Ludwig and Robert. It has now become a vital part of our modern lives; but the concept was not included in Alfred’s will. So, because the Nobel Foundation cannot add to its portfolio of prizes, four Nobel family members, in agreement with the Foundation, formed the Nobel Sustainability Trust to promote sustainability in modern life.

“The trust’s mission is to sustain quality of life in the face of threats – pollution, climate change – and to create the Award for Sustainability.”

Monaco will host the Sustainability Award Ceremony in 2020 or 2021.

Mungo Park added, “We are creating a multi-sovereign backed Global Green Investment Bank and other nations are waiting to participate as soon as the corporate structure is in place.”

Mr Park explained that the investment bank “will provide a service to technology companies and specifically, will not compete with the investment community”.

“Quite the opposite,” he assured. “In fact, its model will be to help companies become investor-ready, bridge financing at a fair and reasonable margin above the investment bank’s cost of money, and will enable companies to strengthen their boards, their management teams, their documentation and their intellectual property portfolios.”

Chairman of the Nobel Sustainability Trust, Professor Michael Nobel, commented, “The official recognition of the award and the Nobel Sustainability Trust foundation expressed during this CleanEquity Monaco conference is of outmost importance, both to the organisation and myself. The tremendous value of such a recognition being confirmed by a world-renown expert in the field like HSH Prince Albert in a plenary session of a meeting of this type cannot be underestimated.”

Professor Nobel went on to say, “The issue of sustainability has in recent years become vitally important for mankind’s wellbeing and even chances of long term survival. It goes far beyond what was thought necessary or important in earlier times. This is also why it has become so important that all of humanity, and not only special interest groups, recognises that sustainability policies needs to become and remain an integral part of our activities in order for us to prosper. Actions and words by recognised world leaders in the field, like Prince Albert, help create and reinforce such beliefs.”

Over the two days, twenty-seven companies presented at the 11th edition of the invitation-only CleanEquity Monaco.

“It’s the people assembled in this room that help turn science fiction into science fact,” said Prince Albert and their clean technologies are testament to his long-standing commitment for the Principality to be a model green country, which respects the natural environment and subscribes to be carbon neutral by 2050.

Local News Cassandra Tanti - February 18, 2020
The 9th edition of the Pink Ribbon Monaco Walk has been a huge success, with close to 200 participants dressing in pink and supporting a very important cause.