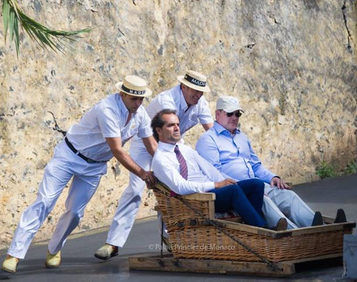 Prince Albert has been in Portugal for several days for a visit of a diplomatic, historical and scientific nature.

On Tuesday, September 5, the Sovereign Prince met HE Marcelo Rebelo de Sousa, President of the Republic of Portugal at the Belém National Palace in Lisbon. They discussed bilateral relations, issues of environmental protection and, more specifically, the topic of Marine Protected Areas.

Then, the Prince went to Funchal, on the Portuguese island of Madeira, to meet up with the Yersin of the Explorations de Monaco as it sets out for Macaronesia.

This first scientific stage is also of historical significance because Prince Albert has returned to the footsteps of his great-great-grandfather Prince Albert I.

Prince Albert attended the opening of the exhibition “A Prince explorer, Albert I of Monaco on the discovery of Madeira”, to be held at the Museum of Natural History of Funchal until January 7, 2018.

This exhibition, carried out by the Archives of the Prince’s Palace in coordination with the Oceanographic Museum, the Audiovisual Archives of Monaco and the Natural History Museum of Funchal, is designed as a travel diary that follows the route to Madeira of Prince Albert I between 1879 and 1912.

It was also on the island that Prince Albert I of Monaco, then heir to the throne, met in 1879 for the first time the Duchess of Richelieu, who became Princess Alice when he married her in 1889.

On Wednesday, September 6, Prince Albert went to the Church of Our Lady of Monte, which houses the statue of the Virgin of Monte, patron saint of Madeira, as well as the tomb of Emperor Charles I of Austria (1887-1922), beatified by John Paul II in 2004.

The Sovereign Prince concluded his visit to Monte by returning to Funchal aboard the famous Carros de Cesto.

The Prince also participated in a workshop of experts who will present a synthesis on research on the monk seal, now the most threatened species in the Mediterranean.

Since August 20, ten researchers from three different organisations have also taken turns to draw up an inventory of the biodiversity of the waters of the little-known archipelago.

Friday, September 7 will be devoted to the discovery of the desert islands, an uninhabited archipelago off Madeira, with the exploration of two caves and the observation of monk seals, cetaceans and seabirds. Prince Albert I had repeatedly explored these Desertas Islands during his visits to more than one hundred years ago.

Local News Cassandra Tanti - January 20, 2021
Nice airport has been awarded the ACI Health Accreditation, an international validation of the health measures implemented over the past months including the creation of a Covid testing centre.