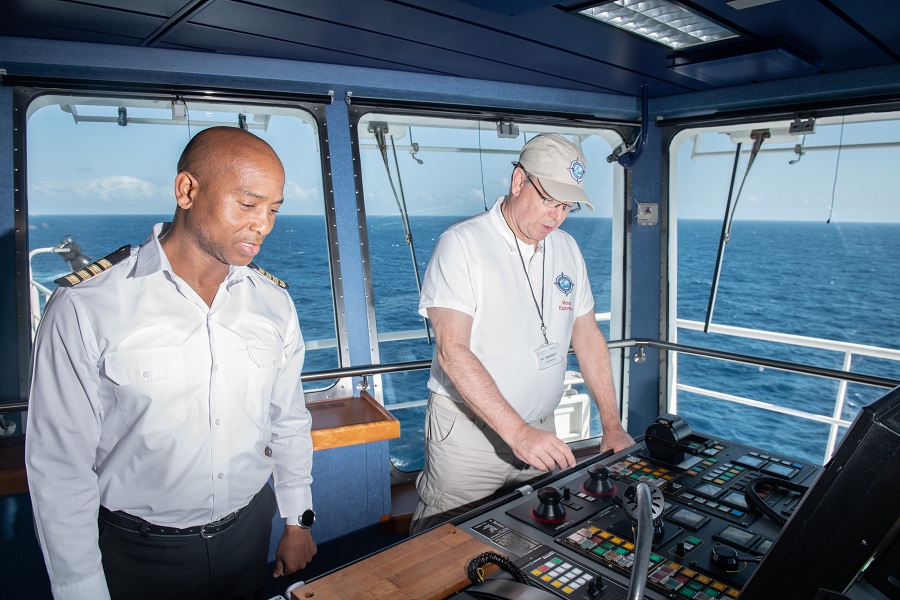 Far from the Mediterranean shores he knows best, Prince Albert II has travelled to the Indian Ocean to join a 150-team of scientists and researchers aboard the S.A. Agulhas.

The #MissionOcéanIndien2022 left Cape Agulhas, the African continent’s most southern point and where the Atlantic Ocean officially meets the Indian Ocean, on Monday 3rd October. Its first stop was Mauritius seven days later before heading to the French overseas territory of La Réunion. The Monaco Explorations expedition will soon reach Mahé, the largest island in the Seychelles archipelago, before sailing back to Mauritius. In total, the mission will cover 7,300 nautical miles – or 13,500km – in two months.

Most recently, the team aboard spent a week in the Aldabra atoll and it was here that Prince Albert II met with Jean-François Ferrari, a Seychellois minister for fishing, and Flavien Joubert, the minister for agriculture, climate change and the environment, on Monday 24th October.

Together they spoke with Doctor Frauke Fleischer-Dogley, the CEO of the Seychelles Island Foundation, to learn more about the biodiversity of the islands and to sign a proclamation to establish a cooperation of research and conservation of the region’s coral reefs between the Scientific Center of Monaco, the Oceanographic Museum of Monaco and the Seychelles Islands Foundation.

“What strikes me today is that expertise and research in the maritime field have never really been priorities,” said Prince Albert. “The ocean remains largely unknown. Yet it holds so many treasures. A better knowledge of them is essential to ensure the protection of our planet.”

Prince Albert II at the helm

On Tuesday 25th October, Prince Albert II joined the S.A. Agulhas and its crew, getting a personal tour of the vessel and its highly developed laboratories from Captain Knowledge Bengu. Ever keen to get involved, the Prince took the helm of an ROV, a remotely operated underwater vehicle, that had been deployed to a depth of 700 metres – a record-breaking depth for this zone of the ocean.

“[The Indian Ocean mission] mobilises significant resources: one of the largest oceanographic vessels in service and an international team of around 150 people representing some 20 nationalities and a wide range of profiles: seasoned scientists, young researchers and students, artists, filmmakers and photographers, divers, communicators, and members of civil society,” says the director of Monaco Explorations, Gilles Bessero.

The flagship of the expedition is the S.A. Agulhas II, a multipurpose vessel of 134 metres that was built in Finland in 2012 and chartered by Monaco Explorations for this unique expedition. The ship is designed for navigating in ice and recently won acclaim for its role in finding Sir Ernst Shackelton’s Endurance, which sank in the Weddell Sea off Antarctica in 1915, in March of this year.

“An adventure addressed to all humanity”

Prince Albert II travelled ahead of the S.A. Agulhas II on Wednesday 26th October in order to meet with the president of the Seychelles, Wavel Ramkalawan, as part of a diplomatic visit in Mahé. It was an opportunity to discuss all he had learnt on the Aldabra atoll and the wider goals of the Monaco Explorations mission.

The objectives of the expedition are to: “understand, analyse and evaluate the state and functioning of the ecosystem of the area”. It hopes to mobilise governments through diplomatic action, and help contribute to a sustainable management of maritime spaces by sharing the issues faced by the region and the knowledge gained thanks to the expedition with as many people as possible.

“The Monaco Explorations are at the confluence of most of the themes which are dear to me and which in this respect resonate particularly in me,” said Prince Albert. “It is an adventure that also echoes the most beautiful traditions of the Principality, and is addressed to all humanity.”

The S.A. Agulhas is expected to be back in Cape Town on Wednesday 30th November.