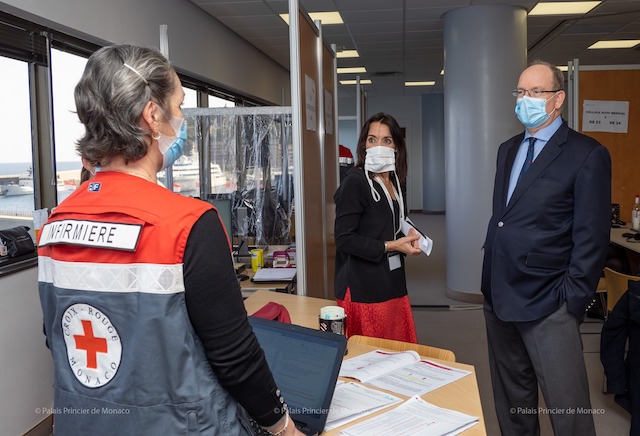 Prince Albert has made his first public visit since contracting Covid-19, visiting workers in two key support centres in Monaco.
On Thursday 16th April, the Prince went to the Rainier III Auditorium which houses both the Covid-19 Call Centre and the Home Patient Monitoring Centre, two structures established by the government.
It was the first public outing by the Prince who, on 31st March, was given the all-clear by doctors after testing positive for the virus on 16th March. Three days later the Palace revealed that the Head of State would remain in confinement in his private apartment while his family – Princess Charlene and twins Prince Jacques and Princess Gabriella – were in their country home behind Monaco.


Accompanied by Minister of Social Affairs and Health Didier Gamerdinger, Prince Albert first had his temperature tested before visiting the Covid-19 Call Centre, which was established at the start of the epidemic to answer questions from the people of Monaco with regards to the health crisis and the government’s response. The unit is comprised of staff from the Department of Health, volunteers from the Monaco Red Cross, and a supervising doctor.
The call centre received upto 200 calls a day during its peak, eventually dropping to around 80. A growing number of calls related to mental health prompted the government to boost psychological support through the network.

The Prince on Thursday also visited the Home Patient Monitoring Centre, which is currently responsible for the care of 101 people suffering only minor symptoms of Covid-19. This unit is also manned by staff from the Health Department, social workers, Monaco Red Cross volunteers, psychologists and other medical staff from the Princess Grace Hospital Centre.