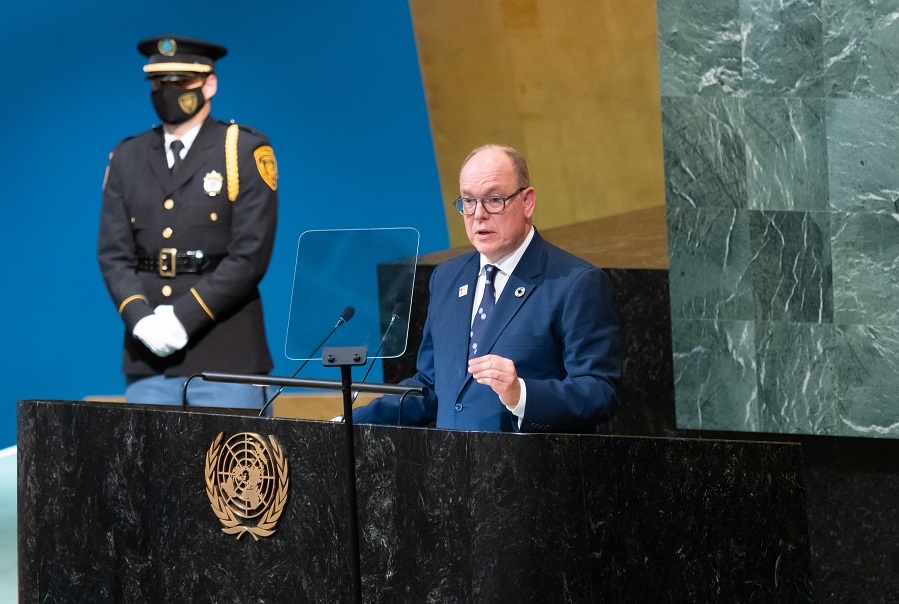 Prince Albert II of Monaco has joined world leaders in addressing the United Nations General Assembly this week, saying it is “high time countries moved beyond speeches and words towards action”.

After attending Queen Elizabeth’s funeral in London on Monday, Prince Albert II travelled to New York to address the United Nations on Wednesday. It is the first time a UN General Assembly has been held in person since the Covid-19 pandemic.

“At a time when two years have passed since the start of the Covid-19 pandemic, this unprecedented health crisis revealed our fault lines in multilateral cooperation coordination. It forced us to take extraordinary social economic measures, both to protect our people and also to mobilise the international monetary system. Our frenetic day-to-day existence means that we forget that in the northern hemisphere, the overshoot day arrives earlier every year,” said Prince Albert in is address. He was referring to Earth Overshoot Day – an illustrative calendar date on which humanity’s resource consumption for the year exceeds Earth’s capacity to regenerate those resources that year.

The theme of the 77th UN General Assembly is ‘A watershed moment: Transformative solutions to interlocking challenges’. It is designed to mobilise support for measures to counter the interlocking and complex crises facing the world.

Prince Albert was joined by other heads of state and government, leaders of UN agencies and international financial institutions who all spoke of the critical situation created by these crises, which include the Covid-19 pandemic, the war in Ukraine, climate change, unprecedented humanitarian challenges, and growing concerns about the global economy.

In reaffirming Monaco’s commitment to the Sustainable Development Goals set out in 2015, the Prince referred to his great, great grandfather Prince Albert I.

“This humanist and visionary sovereign advocated tirelessly for the fundamental role of science to drive social progress, particularly within the framework of political decision making,” said Prince Albert. “A century later, we are commemorating his legacy, which continues to inspire my action and the policies of my government. Monaco is playing its role in the collective efforts to preserve our planet at a time when our ways of living are being turned upside down.”

The Prince referred to the IPCC (Intergovernmental Panel on Climate Change), which “has for three decades now been warning us about the disastrous, often irreversible effects of climate change”, and spoke of how, in the climate conferences in Stockholm and Lisbon, the ocean was included as a key component in the intrinsic link between the well-being of human civilization and a healthy planet.

“The protection of our seas and oceans is part of our family tradition, a cause for which Prince Albert I dedicated his life. His commitment is an example to me, an example that lives on in the commitments of my country and that I’ve chosen myself to follow since I exceeded to the throne in 2005.”

Prince Albert also made a call to action, saying, “Beyond our speeches and words, it is high time to move towards action. This is nothing more or less than an issue of taking the last opportunity we have to build a future for humanity while extreme climate events are multiplying, affecting indiscriminately all nations, but particularly punishing the most vulnerable.”

The Prince said he was thinking, primarily at this time, of Pakistan suffering through the consequences of devastating floods.

“Strengthening adaptation measures must be at the heart of our priorities,” he said. “These urgent and crucial efforts must be carried out, in a concerted way, with policies that seek to drastically reduce greenhouse gas emissions and reverse the trend of biodiversity loss by 2030.”

In concluding, Prince Albert referred to women as the “essential agents of change”, adding, “A strengthened and effective multilateralism, where youth and women would play a predominant role, is the most effective way to deal with global crises.”

The General Assembly opened on 13th September and runs until 23rd September.