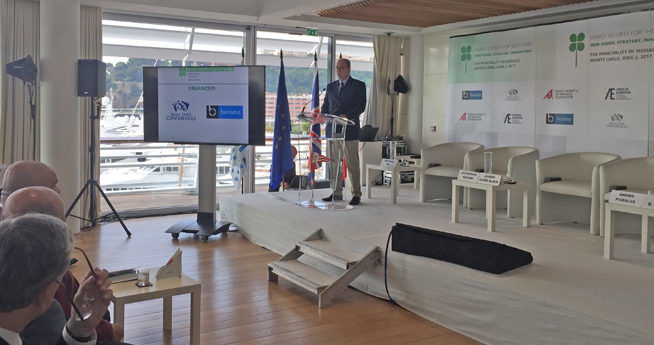 Prince Albert’s welcome speech at the second edition of the Energy Security Forum, held at the Monaco Yacht Club Friday morning, did not miss the opportunity to address US President Donald Trump’s decision yesterday to pull out of Paris Climate Accord.

“On climate, the US administration, in my view, not only is making a historical error, which will notably be accountable for future generations, but also seriously undermines America’s global leadership and its opportunities for economic development that can only be based on technological innovation and the development of a non-carbonated economy.”

The one-day “Energy Security for the Future” forum, organised by Burisma and Adam Smith Conferences, and with the support of the Prince Albert II of Monaco Foundation, focused on what the Prince referred to as the “particularly sensitive subject” of energy security and “how it must be tackled on a global scale”.

Prince Albert began his welcome speech by stating, “Today we are at a crossroads. The energy model that our society has adopted over many decades has clearly revealed its numerous shortcomings.

“These failures include the unequal distribution of resources, which creates dramatic inequalities between regions, countries and individuals. They include the scarcity of these very resources, the scarcity that we now know is increasing and one that creates major strategic tensions.

“Finally, they include energy-related environmental impacts, the serious effects of which we are imposing on future generations, effects such as the destruction of eco-systems, climate change and pollution.”

His Serene Highness emphasised the need for a global strategic vision, particularly in terms of security and long-term consequences, and said his message this morning was about “the commitment necessary to move towards a low-carbon economy and to focus on the need for each and every one of us to explore the mechanisms and consequences in order to promote this implementation.”

He pointed out that as the effects of hydrocarbons on the environment prove to be increasingly serious and generate extreme tensions, “These tensions will only get worse as resources become increasingly scarce. It is therefore our duty to abandon our current energy model and construct a new one before it’s too late.”

Adding that “designing a new model today means moving away from the carbon economy”, he said that it’s a matter of choosing energy transition and renewable energies, energies that are universally distributed, that are inexhaustible and that do not threaten the future of our planet.

“This transition has already begun and has started to yield positive results and must be supported by all. That is what we are doing here in the Principality of Monaco where we have a global policy of promoting renewable energies, clean mobility and energy efficiency.

“This is what we are doing as part of our international commitment through our active participation in UN climate talks.

“This is we are also doing in supporting and welcoming the numerous civil society initiatives, such as the EVER, the ecological vehicle trade fair, and the Formula E, which took place in Monaco a few weeks ago.

“And it is what I hope you will do in your discussions by making the energy transition one of the focal points of the local and global strategies that we must deploy, and by not separating energy security from environmental security.

“Because in order to reflect on and implement this energy transition, one of the key challenges of this century is that we need a great deal of not only determination but energy and skill as well.”

The Energy Security Forum plenary sessions covered themes such as Analytical Market Debate; Energy trading; Regional Perspectives, with a special focus on Central and Eastern Europe; Regional cooperation in the CEE area – V4 initiative, and Creating the Right Energy Mix for a Clean and Secure Future.

Culture Stephanie Horsman - May 23, 2022
The Casino de Monte-Carlo was the site for this year’s European Dealer Championships, where the crème de la crème of card dealers competed and Monaco’s young croupiers placed well.