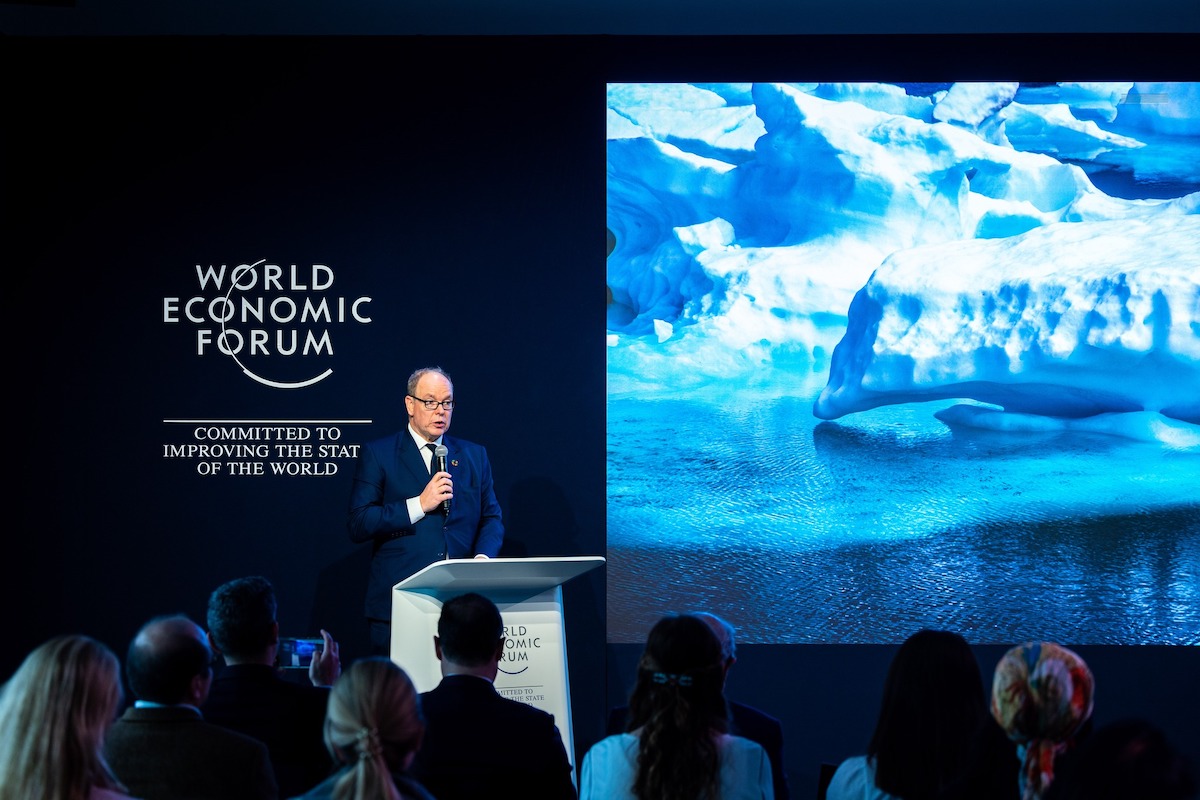 Prince Albert II is at the World Economic Forum in Davos, rallying the world’s leaders behind a movement to direct much more money towards mitigating the harm that is being done to the world’s oceans and biodiversity.

It would hardly be surprising that Prince Albert is championing his favourite causes at the world summit current taking place in Davos, Switzerland.

He hit the ground running this week, attending a series of events dedicated to the conservation of polar regions, the role of philanthropy and finance in stopping climactic catastrophe, climate change and ocean issues.

The Prince opened a talk called ‘Unpacking the Polar Crisis’, where he put a fine point on the importance of protecting the Arctic and Antarctic, saying “Because although the Polar regions concern us all, above all they are dependent on the action of all of us – these regions in which the key challenges and key solutions in regard to our planet’s health are concentrated.”

Furthermore, he called for action from governments, NGOs scientists and businesses to enlist the help of indigenous people in these areas to make effective and lasting change.

At the ‘Finance and Pension Funds for Ocean Health’ session, Monaco’s Sovereign spoke passionately about ocean preservation and how interlinked the health of the seas is to climate and biodiversity. He went on to say that political, financial and scientific resources and funds are woefully short of what is needed to mitigate the situation facing the oceans.

“They all chart a path which I believe is vital: a path to promote ocean action which is not limited to initiatives with unrecoverable funds, but one which creates a new logic for a blue economy, in which nature is no longer a secondary datum, even a negative externality, but the source of new growth,” he declared.

Only 2% of capital raised by charitable institutions and causes is directed toward climate-related issues.

The alliance will aim to forge a coordinated approach to foster effective solutions for long-term impact and create awareness and drive catalytic capital to unlock private finance and multilateral commitments to tackling climate change.

“We are here to act! To try to put an end to this strange situation which means that only a tiny fraction of philanthropic resources are allocated to an issue which undoubtedly has the most consequences for the future of Humanity: the preservation of the environment,” said Monaco’s Head of State. “Let us act, by persuading philanthropists to redirect and increase their contributions, by creating financial and evaluation tools on the ground that will allow us to make these resources fully effective, by mobilizing our contemporaries, businesses and institutions, and by encouraging multilateral institutions to be more ambitious.”

Philanthropic foundations have seen their funding triple over the past five years, from $900 million to $3 billion per year, but still, the amounts fall short of what’s needed. It is estimated that only 2% of capital raised by charitable institutions and causes is directed toward climate-related issues.

Again, the Prince called for action, asking the new alliance to step up their game by mobilising resources to protect the climate, the ocean and biodiversity, promoting solutions with a long-term impact, raising public awareness and raising capital to unlock private finance and multilateral commitments to fight climate change. The price tag for this, he says, is about US$100 trillion to put things right by 2050.